In the early 1960’s Marilyn Monroe’s face was first immortalized by the equally famous Andy Warhol in his series of celebrity portraits. The first of these portraits was a Diptych of 25 copies of her face, from 1962 shortly after her death. Over the years many more brightly colored prints of Marilyn Monroe were produced and reproduced by Warhol using his iconic silk screen printing method.

Over five decades after her mysterious death, the Marilyn craze has not slowed down. Contemporary artists from around the world are still fascinated with her beauty and portray her in their varying styles. The blond bombshell was the most popular sex symbol of the ‘50s and ‘60s, but while she was indicative of the era’s attitude towards sexuality and beauty, in this century, she symbolizes so much more.

Alec Monopoly often portrays celebrity culture and glamour in his vivid, animated style. His extensive collection of paintings and sculptures are exhibited all around the world. Through his art, he comments on societal values, specifically consumerism, capitalism, and greed. Monopoly creates his own narrative using pop culture icons and cartoons.

Marilyn on Blue uses Monopoly’s vivid color palette and unique linework to create an instantly recognizable Marylin. She often has a laughing face or a sultry look; however, in this image, her expression is unusually stoic, giving the viewer a unique perspective of this familiar icon.

Contrasting his usual depictions of wealth and prosperity, using currency signs and money bags, this portrait is uncharacteristically simple. Even without his distinctive signature pictographs, this painting exudes the glamour and charisma we have grown to expect from Alec Monopoly.

Dorit Levinsteins’ sculptures stand apart from anything seen prior. They are meticulously painted with vivid patterns that bring to life the dancing and twisting forms of aluminum or bronze. Her unique works enliven any space, indoors or outdoors, that they are displayed.

Her one-of-a-kind approach to sculpture corresponds perfectly with the unparalleled pop culture icon. As the most photographed person of the 20th century (Levin, Art Historian, 2006) Marylin Monroe’s image has become commonplace, however through the exquisite eye of Levinstein, Monroe becomes reanimated. You can almost hear her sweet voice giggle through the patterns that also allude to her lively personality. 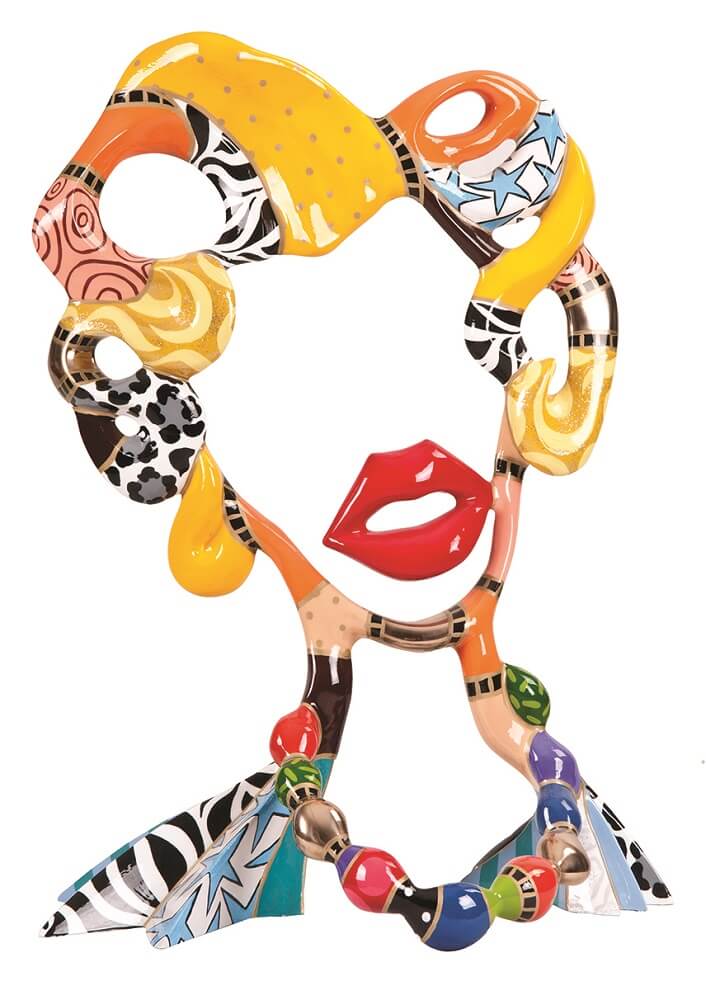 F&G are a collaboration of two imaginative artists driven by a love for animation and graphic design. They create bright, illustrative works using a large variety of unconventional materials. They are continually reinventing classic icons, blending the lines between juvenile bliss and consumerist obsession.

Using colored neon lights, F&G create a unique effect where it seems as though you are receiving only a glimpse of one of the most iconic image of Marilyn Monroe. Here she is, in lights, in her prime. The sexy, sultry blonde bombshell portrayed precisely as she should be.

In the mixed media painting Norma Jean, F&G used her given name before she changed it to something more suitable for the limelight. Characteristic of their usual approach to creation F&G combine the influences of youthful culture, street art, and old Hollywood glamour. 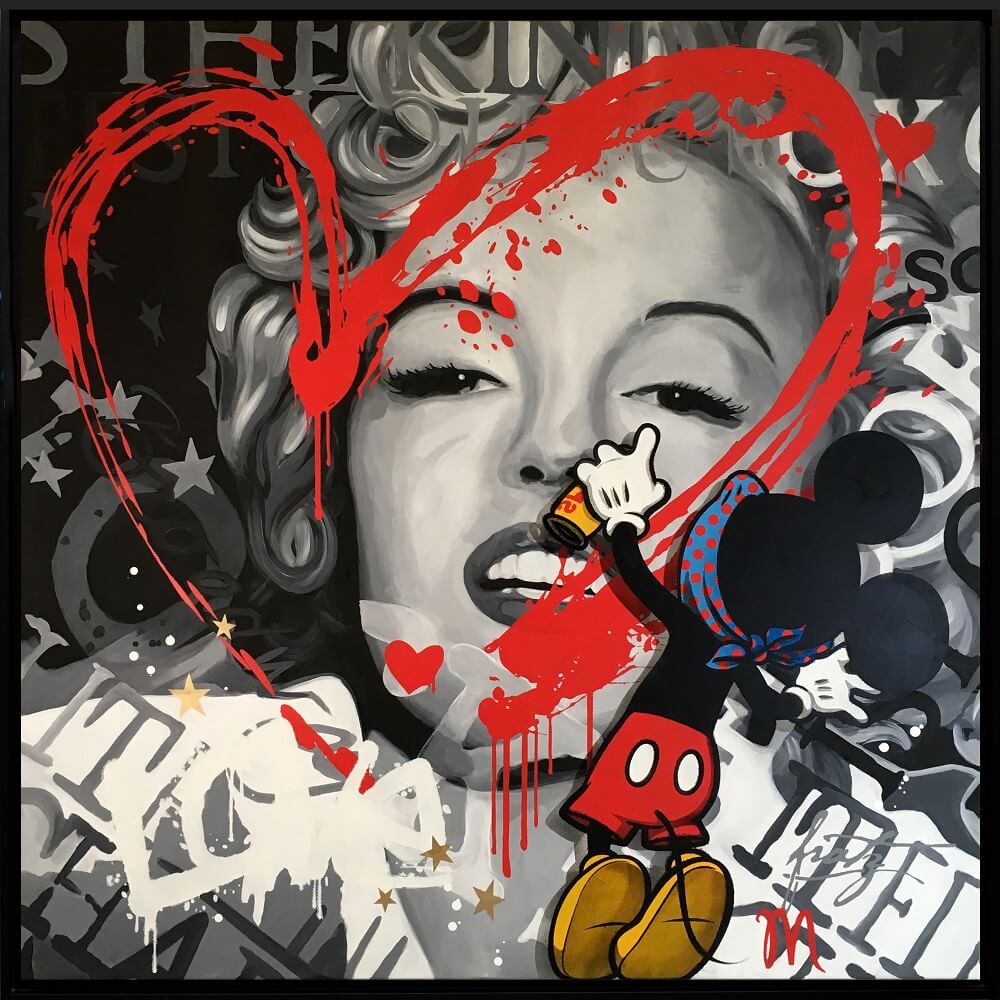 Daniel Gastaud is one such artist whose work often reinterprets famous faces, imagery, and moments in history. Gastaud’s unique style consists of a marriage of unconventional mediums. Using light and soft feathers, he creates a uniquely delicate surface on which the image or the portrait will live. Every stroke of his brush seems to mimic the delicate feathers below. Upon first glance, it resembles an abstract pattern that was nonchalantly brushed across a canvas, but as the viewer is drawn in by the beautiful overlayed imagery and soft colors, they begin to notice the intricacies of the featherwork, adding another layer to viewing the art. 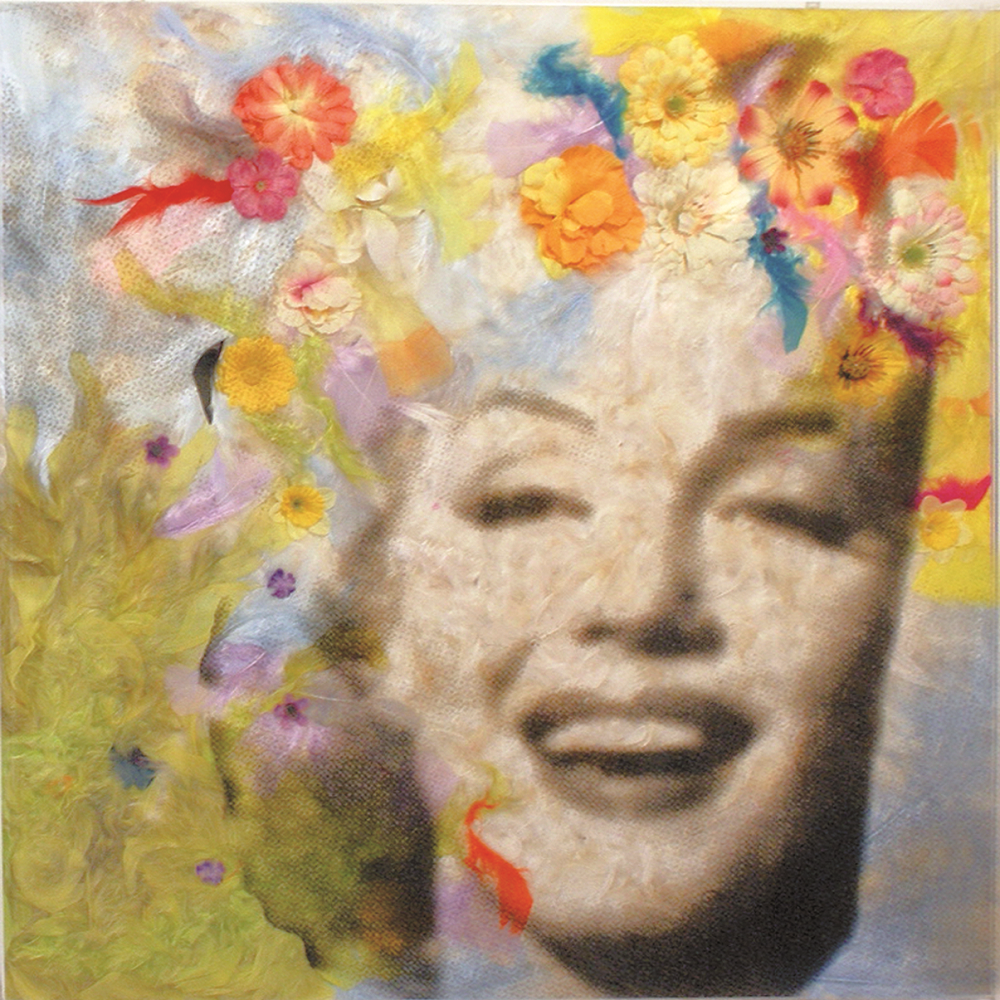 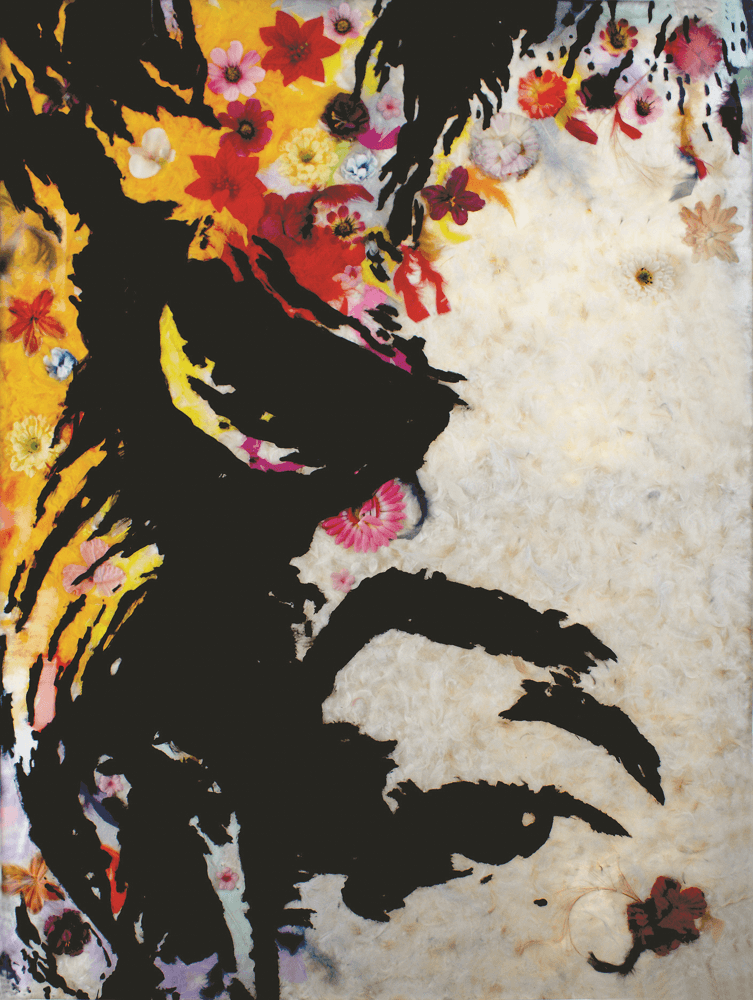 Gastaud often recreates famous portraits of celebrities, most often from old Hollywood, including Ava Gardner, and Rita Hayworth, but the most recognizable of all are his portraits of the jovial Marilyn Monroe. Her bright smile and expressive eyes naturally draw in the viewer and are complemented by Gastauds artistic style.

The flowers in Marilyn’s hair harmonize with the plumage on which her face is painted. In the middle of the soft colors and flower fields are her recognizable eyes. Her expression is sultry as well as angelic. Gastaud perfectly portrays her sex appeal and her humanity through his extraordinary works.

Postmodern pop exemplifies Marco Battaglini’s unique style. Masterfully blending classic and contemporary Battaglini conceptualizes the coexistence of various artistic and cultural backgrounds within one composition. On a plane where time no longer exists Battaglini connects to his Italian roots, highlights the proliferating graffiti culture, and pays homage to respectable artists throughout history.

In his mixed media painting, Gentlemen Prefer Blondes Battaglini tributes Marilyn Monroe in two different ways. Firstly in the title of the artwork, dubbed with the same name as the 1953 comedic film, was one of Monroe’s most successful movies. This film established her onscreen persona as the beautifully daft blonde.

The second reference is apparent at first glance., the part of the composition that first catches the viewer’s eye, this also is the most iconic of a series of Andy Warhol’s Marilyn Monroe (Marylin) prints from 1967. The striking mint background and yellow-blonde hair are typical of Warhol’s style. In Battaglini’s portrayal of this recognizable work, he combines elements drawn from classical art as well as hidden symbolism reflecting on diverse modern-day issues, all pointing towards Marilyn. In this singular composition, Battaglini creates a beautiful amalgamation of distinct artistic styles resulting in a canvas that sparks dialogue and continues to surprise you every time you look. 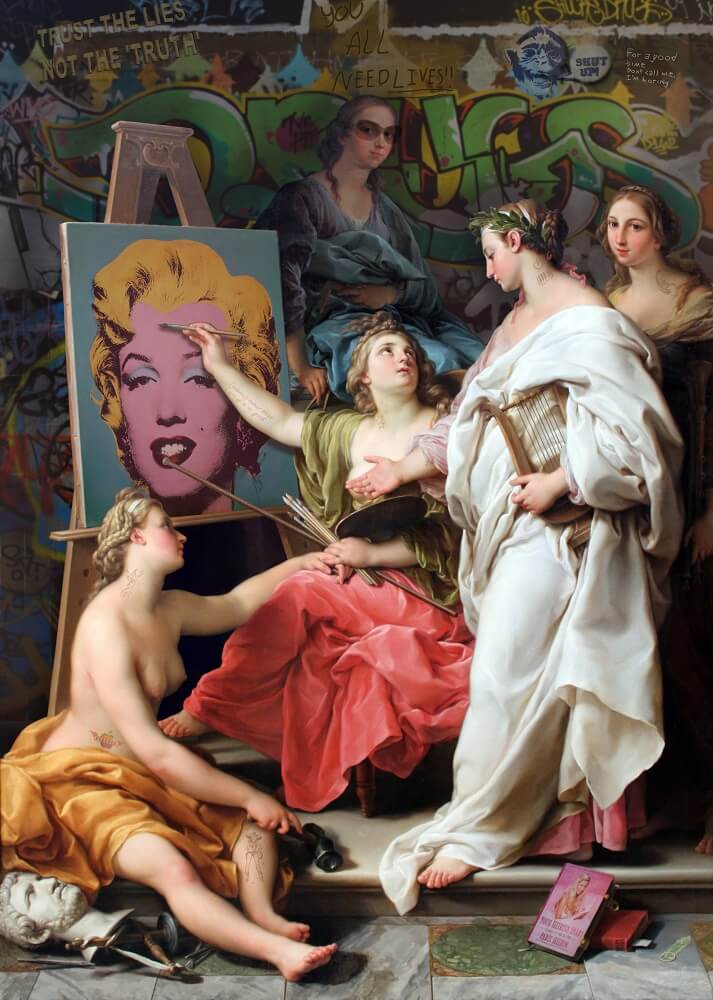 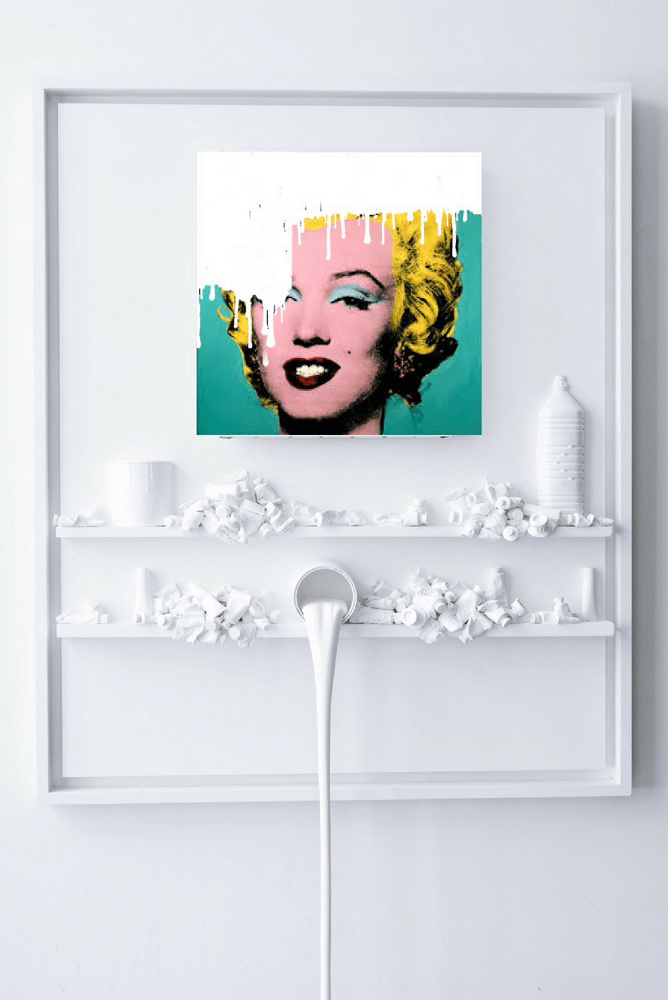 An expert in art and design, Paul Sibuet has created his artistic signature in a culture that is overstimulated with new and exciting ideas in wall art. Sibuet stops time with his three-dimensional pastiche compositions. These works are paradoxical in nature as they are both monochromatic and bright, as well as motionless while still being lively. It begs the viewer to take a closer look, find parallels in their day-to-day lives, imagery from childhood, and explorations of masterful artworks from history.

In Flow – Marilyn Sibuet tributes both Marilyn Monroe and Andy Warhol by using Warhol’s most recognizable portrait of the actress, singer. The original photograph from a publicity still from the movie Niagara in 1953 has now been canonized by Warhol, Sibuet, and Battaglini to name only a few. In Sibuet’s portrayal, he expresses his oneiric reality drawing in the viewer to discover more.

Gumm recalls his inspiration dawning in childhood when he first started drawing and creating his own art using found objects. Profoundly inspired by Andy Warhol and pop-art, Gumm began a collection of ‘crushed’ cans portraying imagery collected from pop-culture throughout the decades. The folded metal forms unique dimensions, bending shapes, and creating shadows that change the way the viewer sees the bright colors that Gumm to which is always drawn.

A favorite of many, the ‘mint’ Marilyn was characteristic of Warhol’s collection of Marilyn Monroe prints encapturing the likeness of the iconic celebrity. The variety of greens, pale blue, bubble gum pink, and other unnatural colors were emblematic of a series that became a poignant symbol of that era. 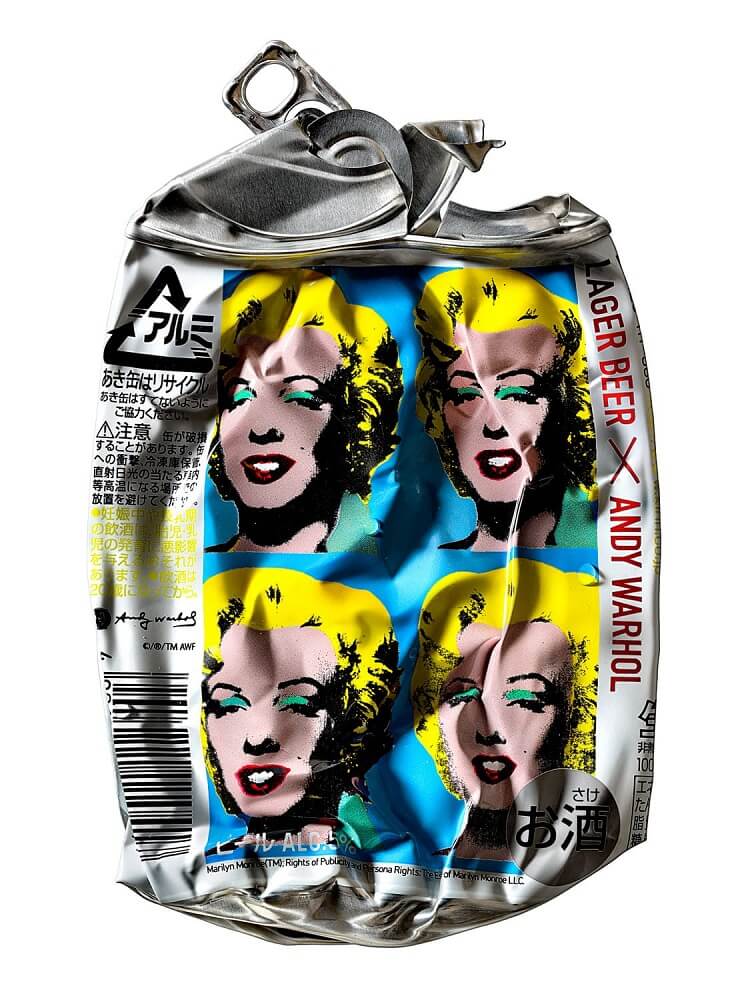 A sex symbol with many layers, Marilyn Monroe was first canonized by Andy Warhol, and now lives on in the artworks of many. The question remains, was she immortalized as being the two-dimensional image, the embodiment of an artistic genre, or as the archetypical ‘blonde bombshell,’ the first of her kind, personifying generations of celebrities to come? Either way, her image captures many, her glamorous lifestyle intrigues all, and her most notable features inspire artists from around the globe. 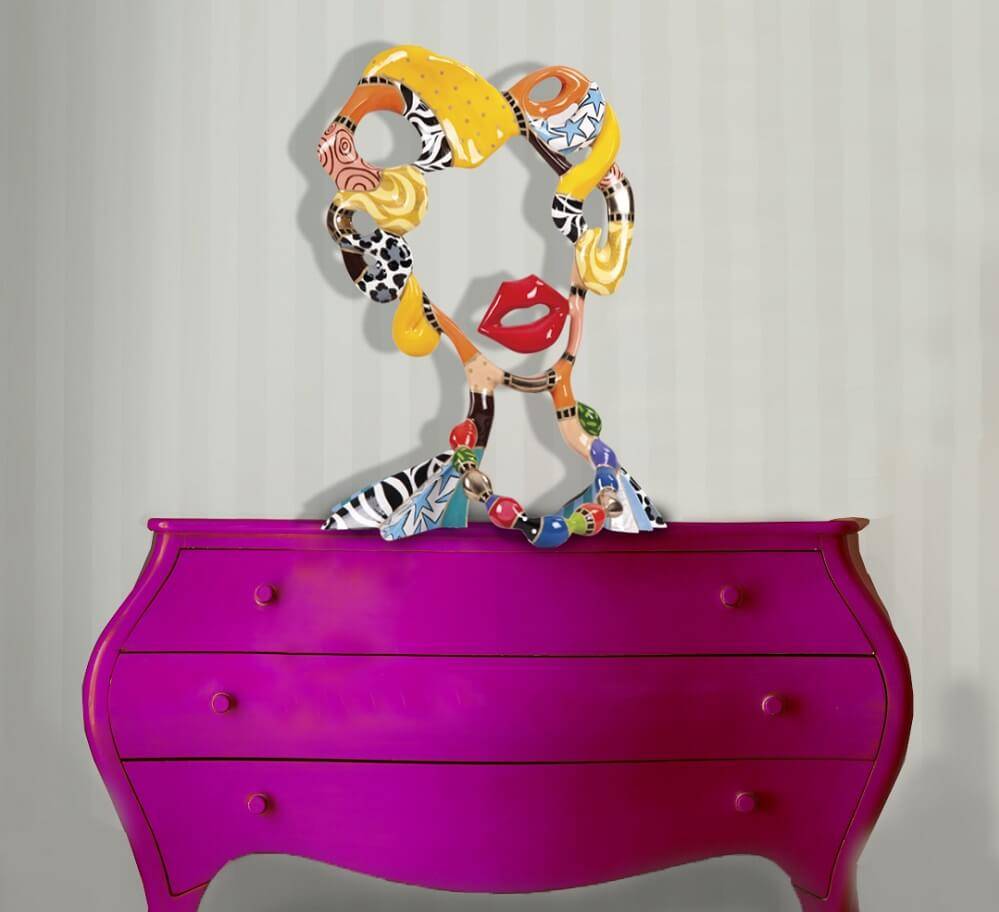 To learn more about the artists featured in the article visit Eden Fine Art Galleries located in prime cities worldwide.