Alec Monopoly’s signature style of incorporating pop culture characters and celebrity likenesses into vibrant, neon works of art have catapulted him to rock-star levels of notoriety while elevating the status of his art to that of an exclusive collector’s item.

In fact, search ‘Alec Monopoly net worth’ and you’ll discover he is in fact among the 100 artists who have seen the biggest gain in interested users on the Artnet Database, even coming in ahead of Jeff Koons. 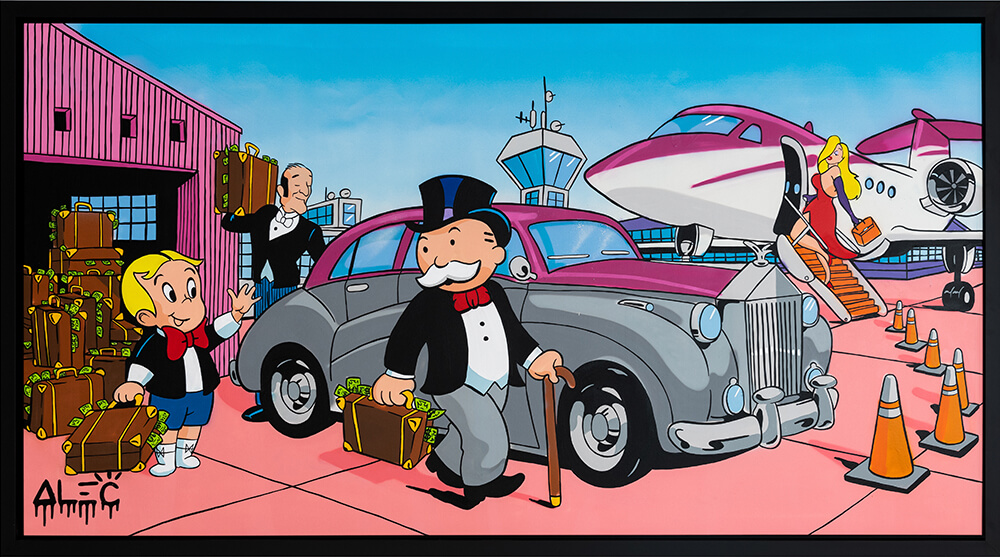 But how exactly did this happen? As it turns out, the trajectory of nouveau art becoming an exclusive collector’s item parallels that of established luxury brands. When it comes to availability, products are like art. Scarcity breeds desire.

The best example of this is the legendary Patek Phillipe Nautilus watch, specifically the 5711 model. 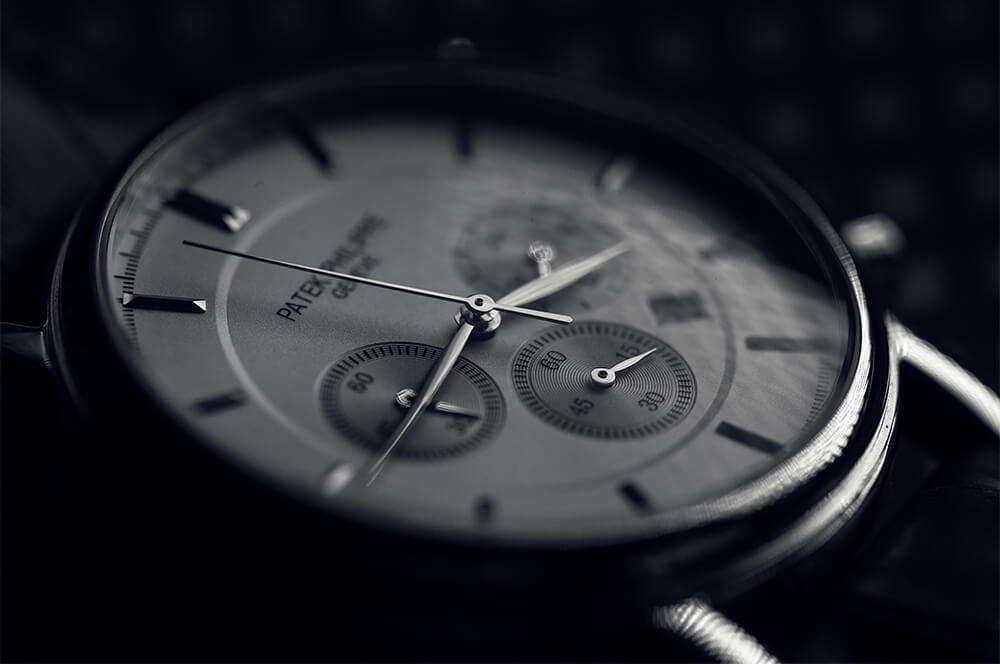 While Patek Phillipe is one of the most esteemed watchmakers in the world, the origins of their prestige lie in the fact that they only produce approximately 50,000 watches per year, in comparison to most other brands that produce around one million.

This is an intentional strategy by the company that has helped protect and elevate the value of the brand. The popularity of the Nautilus 5711 has been widely discussed in recent years, as the company produces less and continues to slowly raise the cost of its products. The Nautilus 5711 currently retails for around $30,000. 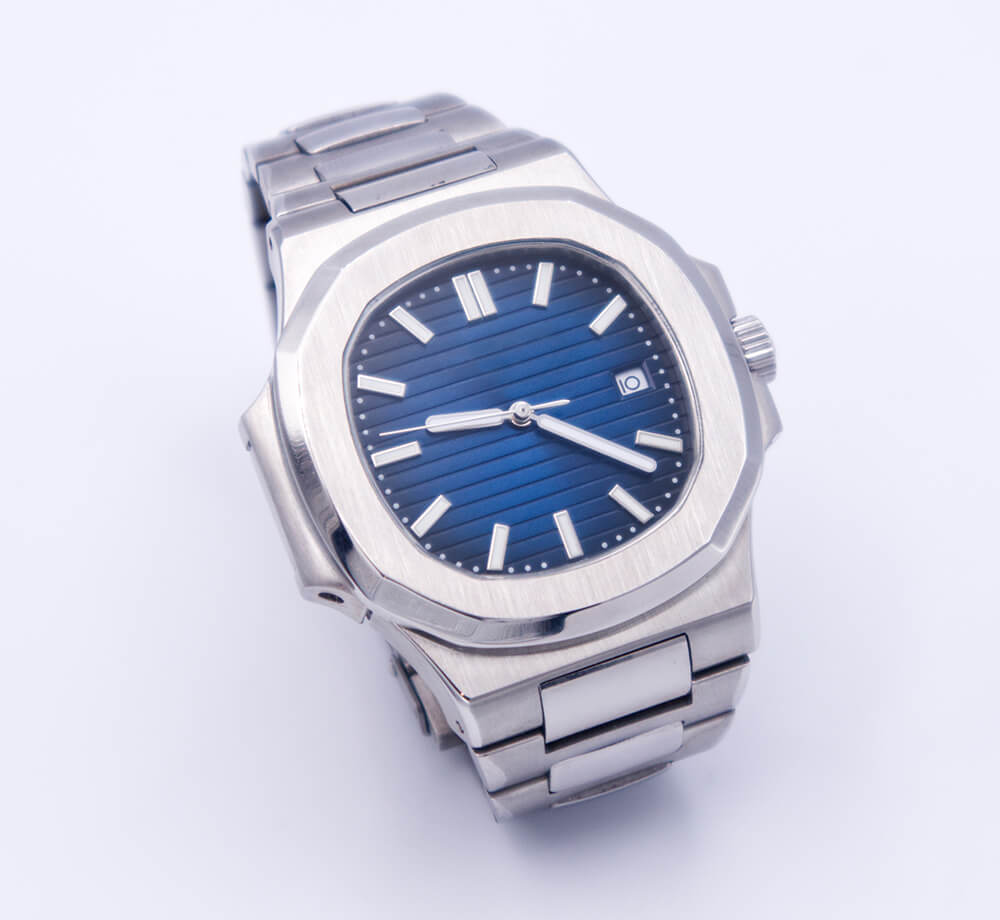 The 5711 model may not be the flashiest of Patek Phillipe’s watch collection, but its innovative features, clean steel design, and overall elegance have separated it into a class of its own. In fact, those who can afford a Nautilus 5711, may find themselves waiting up to 10 years, that is, if they can get on the list.

As with art, Patek Philippe watches have a worthwhile resale value and are considered an investment purchase. Nautilus watches are most often owned by collectors and people who hold on to them with the next generation in mind. With many watches acquired at auction, the value of vintage models is most likely to continue to increase over time. 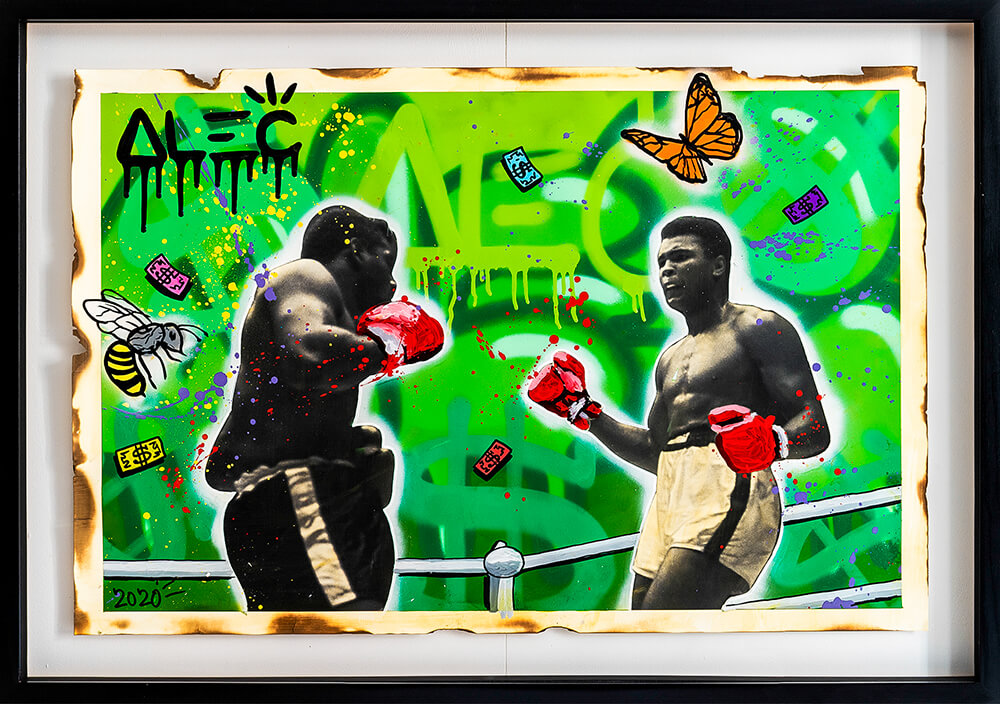 The same can be said of original Alec Monopoly art, in that the price of his work continues to increase at the same rate as the exclusivity of his commissions. Not being accepted by the traditional art milieu has only added to his notoriety as an avant-garde subversive, whose art is so valued that it is created and sold with the guarantee that it is not replicated in any way, whether in prints or copycat murals. 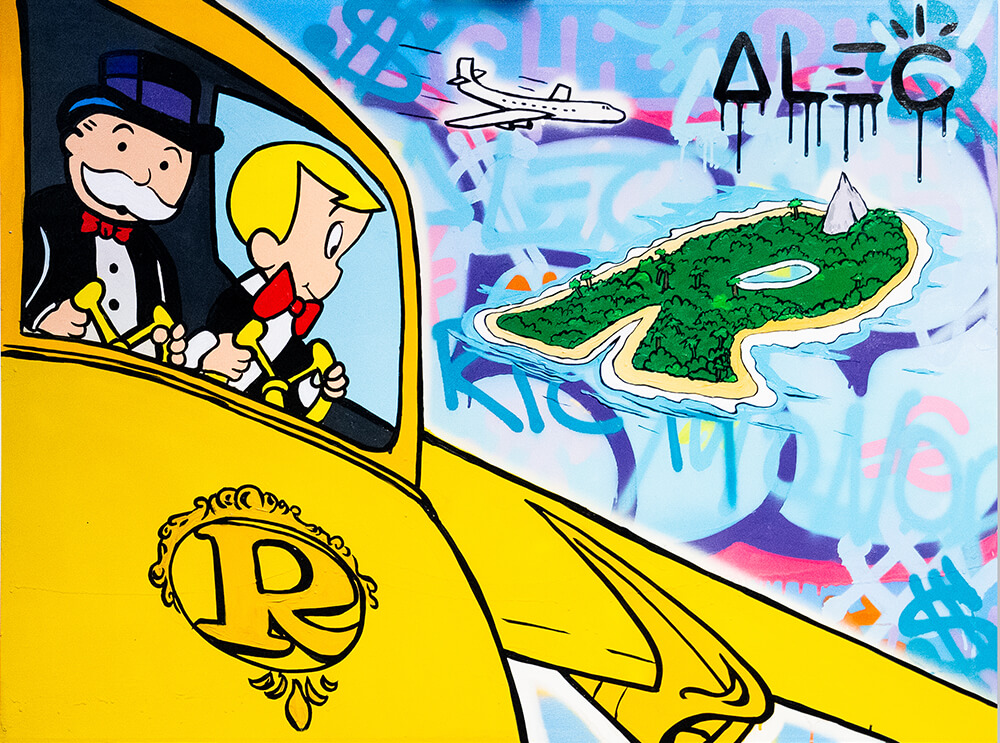 Being part of Monopoly’s signature art statement is something that goes along with owning his work. However, his interpretation of the effects of money on modern society is never reduced to mere criticism of the wealthy. While Monopoly art is found in the homes of celebrities from Khloe Kardashian and Snoop Dogg to actor Adrian Brody, its themes of how we engage with capitalism can be universally appreciated in the Western world.

In Monopoly’s own real-life collaboration with brands like Hermès and Philipp Plein, he incorporates labels of luxury that personify the high life of his artwork’s themes. 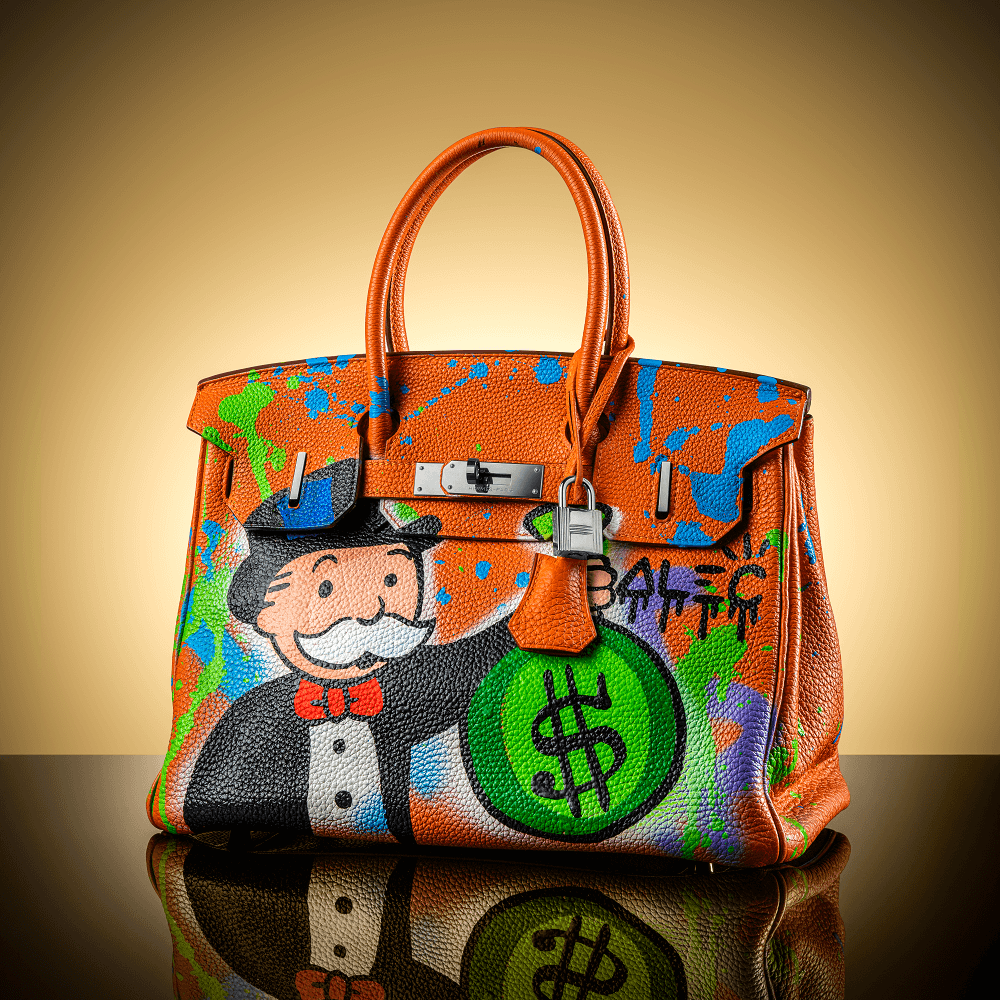 Monopoly’s pop-inflected paintings featuring scenes and symbols of luxury have become trophies of celebrity culture and playful mementos of a capitalist saturated world that art is not immune to. The twist is that his work does not abhor this realization, but rather plays into it, elevating its message to active performance. 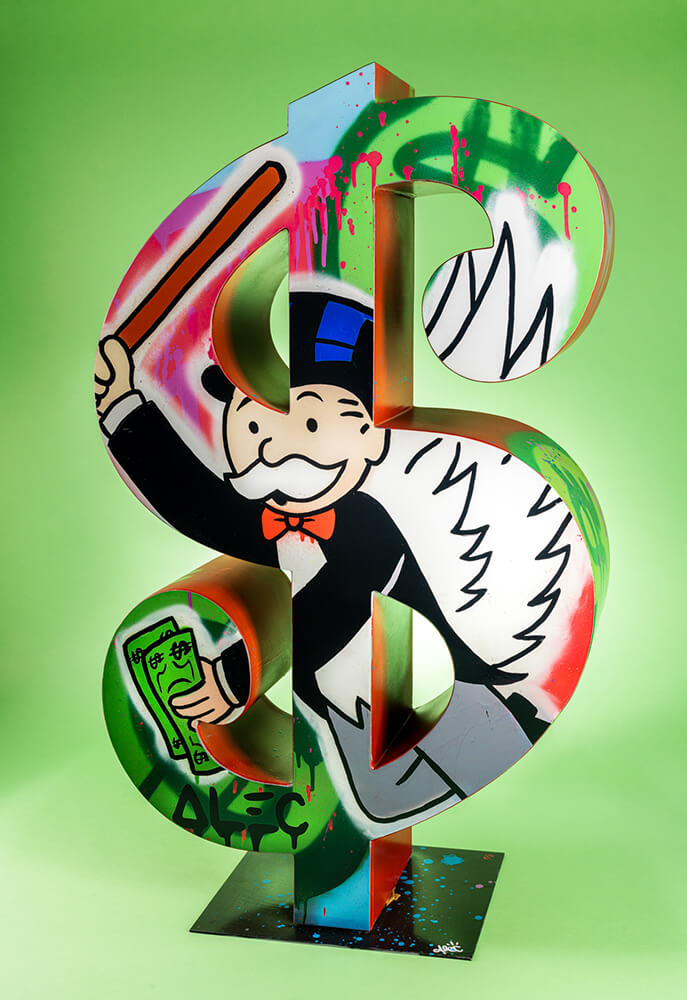 In this sense, his own work becomes a unique artifact of the blended worlds of art and consumerism, with his vast fanbase eagerly participating.

Ultimately, Alec Monopoly’s contemporary art aspires to make a long term impact not only with provocative imagery but by interaction with its audience. Shedding light on what he believes is a broken system, Monopoly chose to make the transition from public graffiti to canvas for the sake of preserving what he communicates.

It is only incidental that Monopoly’s commercial success comes as a result of his criticism of money and excess. Public curiosity around the subject of Alec Monopoly’s net worth has only increased. However, in the words of Phillipe Patek CEO, Theirry Stern, “…this is not a race to make more money… it is a race for beauty, for the long term…” Insofar that the art of Alec Monopoly is a coveted product, its exclusivity will persist as art collectors line up to purchase.

As we approach the end of the 2022 year, we take a look a look forward into the new year and spectate what we believe to be the upcoming trends in the art industry for 2023. Click here to learn more.

Inspired by the works of the masters, many artists that work at the forefront of the art world often draw inspiration from iconic faces of the industry who paved the way for them. Click here to learn more.