Following his dreams of creating public art for the masses, Monopoly has made a name for himself with his vibrant reimaginings of American pop culture icons like Scrooge McDuck and Rich Uncle Pennybags.

It is only in recent years that Monopoly has begun blending art with luxury brands, incorporating well-known fashion labels into his work by turning them into a new kind of canvas. The most famous examples of this are the iconic Alec Monopoly Birkins; his customized, hand-painted Hermès Birkin bags.

The Alec Monopoly Birkin bags are synonymous with wealth, luxury, and exclusivity. However, the legend of how the original Birkin bags were invented involves the serendipitous meeting of Hermès chief executive Jean-Louis Dumas and British actress, Jane Birkin, on a flight from Paris to London in 1983.

Birkin explained to Dumas that it had been difficult to find a leather weekend bag that she really liked, one that was large enough to hold everything she needed.

This inspired Dumas to create the design for the now ubiquitous “Birkin bag” as the high-end answer to a practical women’s handbag.

Today, prices for Birkin bags range from $11,900 to $300,000, according to the type of leather and whether or not exotic skins, such as crocodile or ostric, were used. The bags are distributed to Hermès boutiques on unpredictable schedules and in limited quantities, creating scarcity and exclusivity.

Waiting lists can stretch on for years, but reportedly getting your name on such a list requires either celebrity status or a personal relationship with a sales associate.

It is unclear how Monopoly initially started customizing Birkins, but his reasoning for adding an undeniable level of exclusivity to his already notorious artwork is pretty straightforward.

Of his creative process, Monopoly is quoted as saying, “…painting a Birkin bag is completely different from a painting. It’s such an unusual canvas, the front of it is not flat. It’s kind of controversial that we’re painting on these. Some Birkin fans think it’s sacrilegious, others think it’s amazing, I think it’s super dope because you are taking a super rare, valuable item and adding to its aesthetic and value, and it (becomes) a one of a kind piece of art. The beauty of these bags is they’re all very rare, and when you have…paint on it, it becomes extremely rare.”

The meticulous painting process begins with the delivery of the bags to Monopoly’s studio. “I used to get pretty nervous when I painted these,” Monopoly admits. “You don’t want to ruin a $15,000 dollar bag.” To create a background, the first coat is spray painted in front of a fan, giving the color a snowy, dusted look across the leather. Each layer of spray paint must dry completely, sometimes for several hours, before adding on. Because of the repetitive nature of the painting process, custom painted Birkin bags take weeks to complete.

The same lines must be painted over several times because of the protruding grains of the leather. For the smaller details, Monopoly spray paints a solid outline of color, before carefully painting freehand with a narrow paintbrush.

I used to get pretty nervous when I painted these. You don’t want to ruin a $15,000 dollar bag.

Final touches are added by spray painting his graffiti signature. “There are no mistakes in art”, he says, splattering paint across the Birkin’s remaining bare surfaces.

Collectors of Alec Monopoly Birkin bags include celebrities like Miley Cyrus and Khloe Kardashian. Monopoly famously posted about Khloe’s lime green Birkin emblazoned with a painting of Uncle Pennybags, dollar bills and her nickname, “KloMoney” on his Instagram account.

While Monopoly is upfront about what it takes to create one of his one of a kind works of art (Kardashian’s custom Birkin took more than 3 weeks to complete), the bags make a statement on their own, creating their own brand of publicity as they are flaunted on the arms of the elite.

In this way, the world’s rarest handbag is recreated as a vibrant piece of performance art, elevating its exclusivity, and blurring the line between the worlds of art and fashion.

Explore the entirety of the Alec Monopoly Birkin and art collection exclusively at Eden Gallery.

You can find out more about which cookies we are using or switch them off in settings. 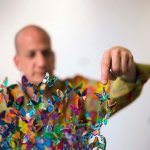 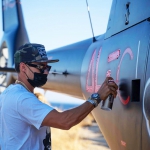 This website uses cookies so that we can provide you with the best user experience possible. Cookie information is stored in your browser and performs functions such as recognising you when you return to our website and helping our team to understand which sections of the website you find most interesting and useful.

Strictly Necessary Cookie should be enabled at all times so that we can save your preferences for cookie settings.

If you disable this cookie, we will not be able to save your preferences. This means that every time you visit this website you will need to enable or disable cookies again.

Please enable Strictly Necessary Cookies first so that we can save your preferences!