Jonty Hurwitz is an international sensation whose work seeks to join the worlds of science and art. His diverse collection consists of some of the world’s most scientifically innovative artwork: anamorphic art sculpture.

Anamorphic projection is a challenge to the rules of perspective. It challenges the subject/object relationship of classic linear perspective by changing how things appear to the naked eye from different vantage points. For instance, while looking at anamorphic art, distorted projection requires the viewer to occupy a specific vantage point in order to view a recognizable image. From any other perspective, the image is not realized.

The process of anamorphosis was traditionally used to depict aesthetic subjects that were considered scandalous or philosophically obscure. The inverted use of perspective, therefore, has metaphorical significance to the artist and can provide insight into the immediate assumptions made from the human gaze.

The curious effects of anamorphosis were first understood by Leonardo Da Vinci who included anamorphic drawings in his volume of sketches and writings, Codex Atlanticus. Anamorphosis was also used by Jacobite artists in the 18th century to secretly depict images of Prince Charles during the time of English censorship. The aim of anamorphic projection is to subvert the conventions of looking and to direct the observer to shift their gaze to multiple angles.

For anamorphic images or sculptures to perspectively distort, light is reflected from an object intersecting a planar surface. Hurwitz is a pioneer in the creation of this type of catoptric sculpture. Prior to his first anamorphic work, Rejuvenation, anamorphosis did not exist in sculpture. Hurwitz has explained that while painting is possible in a mirror, three-dimensional anamorphosis could only have come into being with the invention of powerful computers. Each of his sculptures involves billions of calculations using an algorithm derived from pi.

In Hurwitz’s most recent anamorphic sculpture collection, the silver cones are precision-engineered and polished to an accuracy of 50 microns using highly reflective aluminum. The digital art (Giclee) prints on cotton watercolor paper are mounted on Perspex and brushed aluminium.

Taking inspiration from the work of Amy Winehouse, ‘What A Jazz Genius May Hear’ explores the deeper aspects of Amy’s soulful understanding of music.

With the intention of exploring the complex notion that time is not absolute, ‘Understanding The Mind of Einstein’, is based on Albert Einstein’s theory of relativity. Using a visual metaphor, it conveys the idea that the perceptions of different observers can be separated from the notion of the absolute. 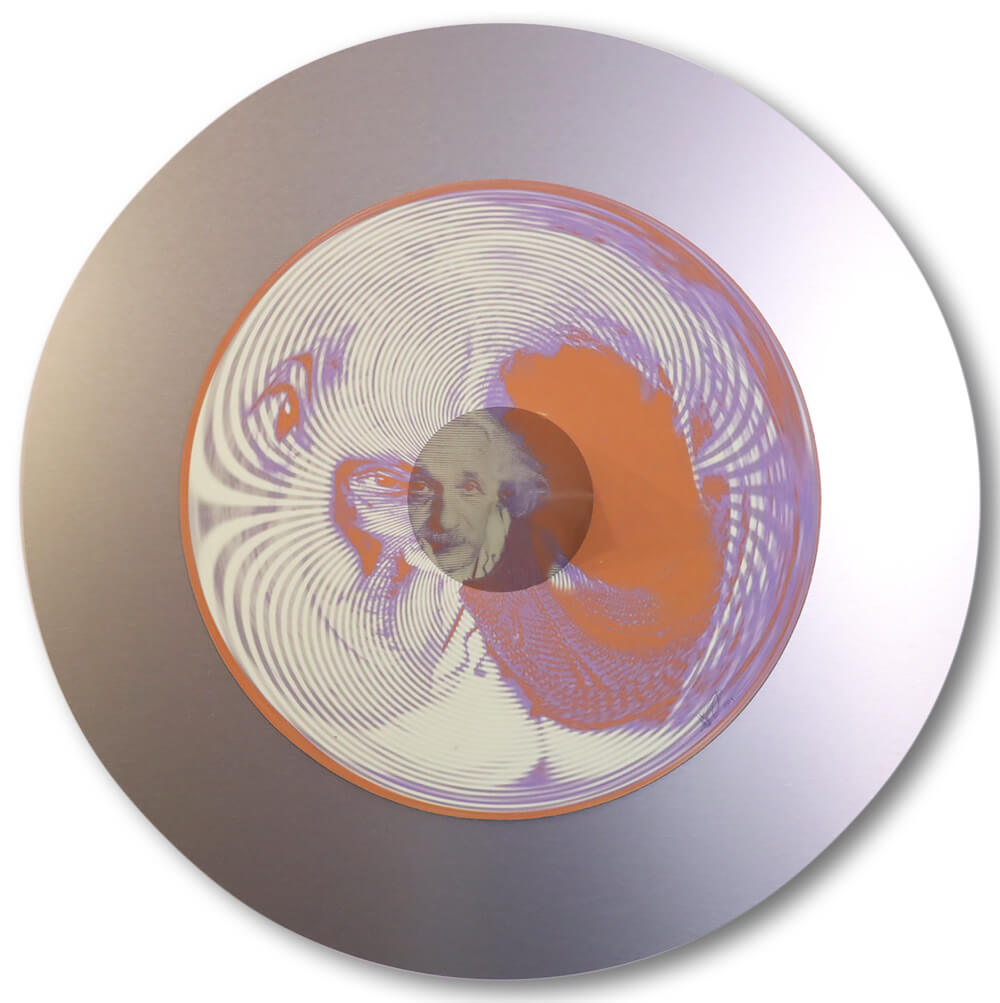 ‘African Mask: Blue Flower’ was created based on a photograph the artist took of an unidentified flower in a friend’s vegetable garden. Inspired by the color palette that nature can create, the essence of this work is the concept that these color palettes are coded deep into the DNA in some mathematical algorithm. In Hurwitz’s own words: “I wanted to work with the idea of hidden mathematical structure generating visible beauty”. 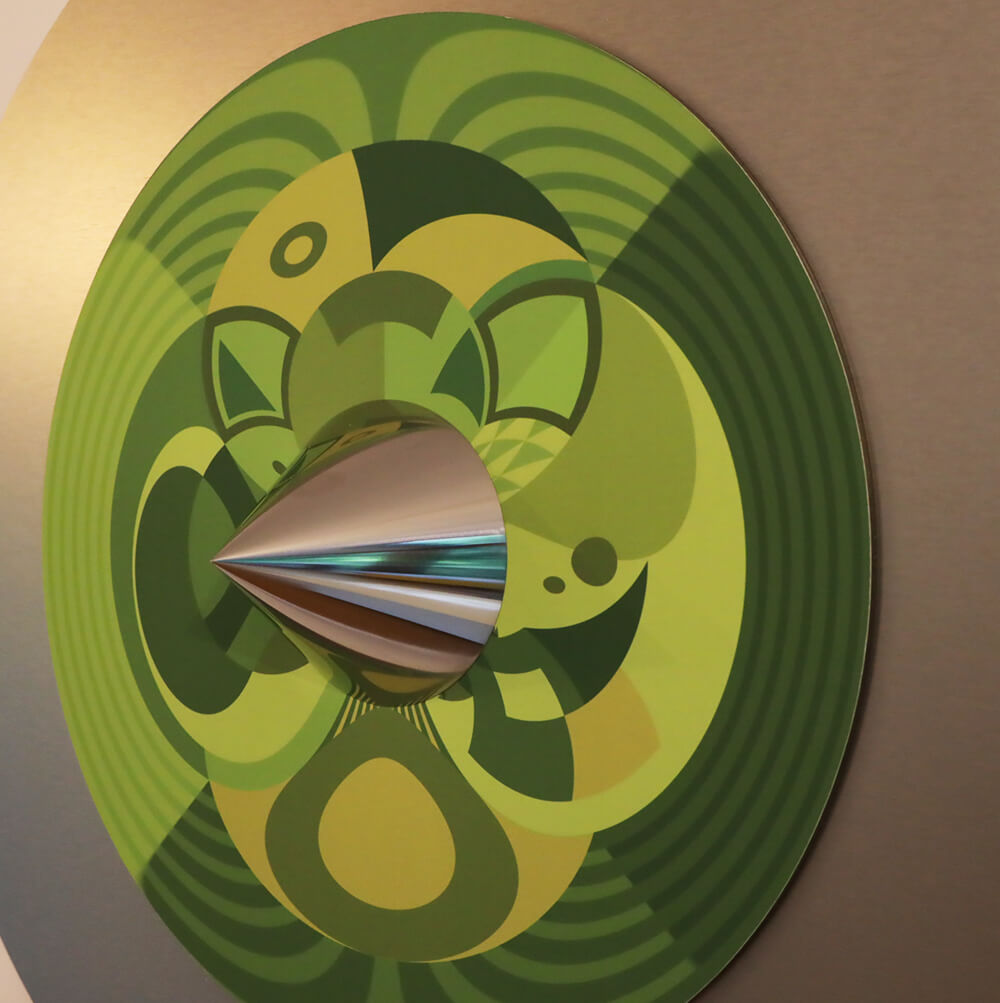 Similarly, ‘African Mask: Gunnera Leaf’ was also inspired by a photograph: a majestic Gunnera leaf and the subtle interplay of colors in the leaf’s palette.

As a native South African, Hurwitz remembers exactly where he was in 2013 when he heard the news that Nelson Mandela had passed away. Questions arose when reflecting on the impact of Mandela’s legacy. “How does one begin to try and understand the delicacy, the empathy, the resolve needed to manifest peace in a volatile society?”

‘Understanding Peace’ is an attempt to express the beauty and complexity of Mandela’s peace through the language of visual art and mathematics. 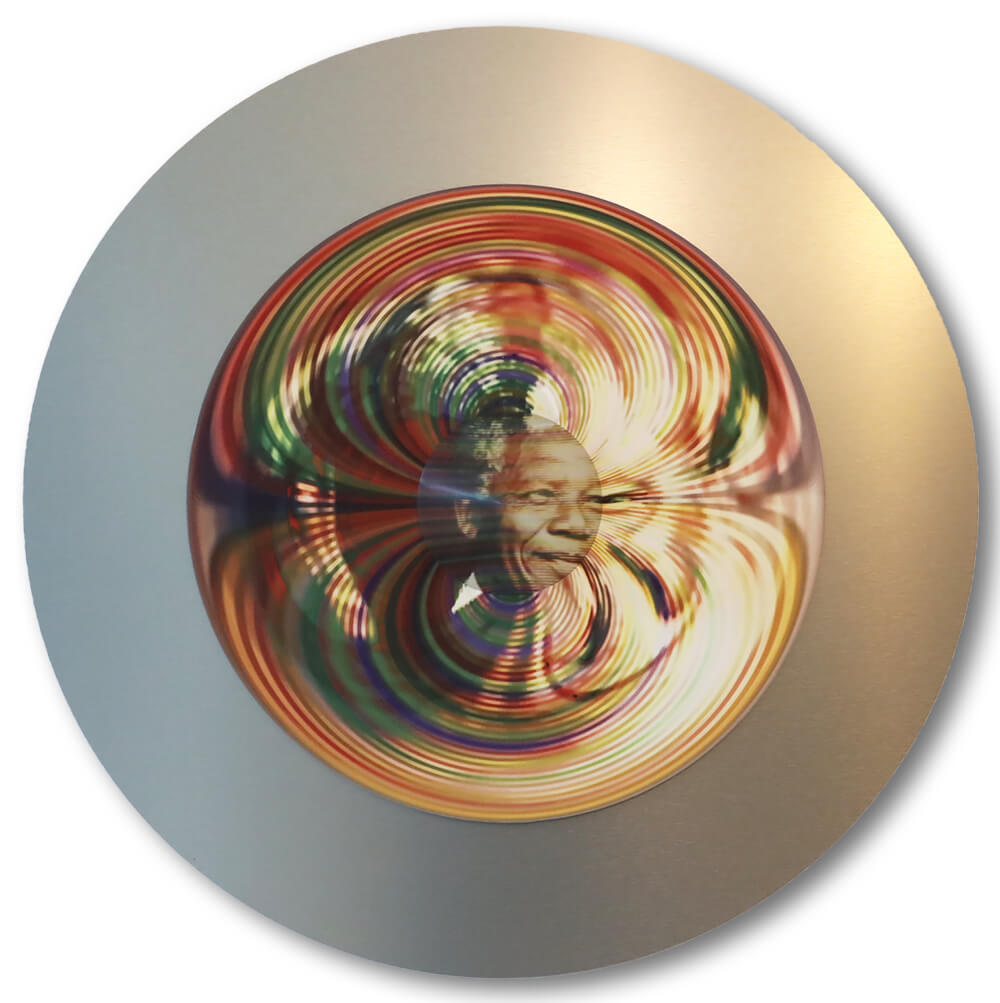 Jonty Hurwitz is driven by artistic challenges to create scientifically engineered, genuinely distinctive works. In a 2015 documentary by CNN on Hurwitz, BBC art critic Estelle Lovatt commented on Hurwitz’s work: “If Leonardo Da Vinci were alive today, he would have been doing what Jonty is doing. He would have been using algorithms.” In this way, Hurwitz is a true artist-scientist archetype, bending the rules and recreating what is possible in the field of art.