To the unfamiliar, graffiti may be dismissed as vandalism. Not everyone will recognize or appreciate the different graffiti styles seen on the streets today.

Graffiti is an ever-changing art form, and it’s common for artists to add or paint over the artwork of others, creating entirely new works of art.

If you pay attention to the artwork around you every day, you will see distinct graffiti styles. There are roughly ten top graffiti styles or categories commonly found today.

Graffiti is a type of artwork, although it is not always positively received or perceived as art.

Graffiti is an urban art form, but some graffiti art makes its way into the world of high art. Some graffiti artists, such as Alec Monopoly, have become household names.

Still, not everyone considers graffiti an art form, and the law in most places considers it vandalism.

Graffiti first became widespread in New York in the 1970s on subways and buildings around the city.

In the early days of modern graffiti, taggers were associated with crime and violent street culture. In the 1970s, graffiti was common among gangs which created a bad reputation.

In the early days of graffiti culture, taggers used to work in groups known as “crews” and subway cars were a popular canvas.

At its peak in the 1970s, graffiti tags on trains were so prevalent that in many major cities you could barely see through the subway car windows.

By the 1980s, the authorities had cracked down on tagging. From then on, it became much harder to tag on subway trains without getting caught.

Tags then started to become more prevalent on roofs of buildings.

Because the law considers graffiti as vandalism, most graffiti artists, or “writers,” use a tagger name or pseudonyms.

Anonymity and not getting caught are essential. The risks and challenge of tagging somewhere high-profile or hard to reach is part of graffiti’s appeal.

Most well-known graffiti styles are text-based, but the scene has expanded to include images, mixed media, and even 3D art forms.

There is an overlap with street art, and many artists cross over between the two styles. However, graffiti is a distinct art form with its unique styles and culture.

Tagging is the easiest, simplest, and most recognized style of graffiti. A tag is essentially the artist’s “signature” using a pseudonym.

A tag is usually created with spray paint cans, includes only one color, and writes the artist’s tag name or identifying symbol.

Famous taggers include the legendary Cornbread, who broke into the Philadelphia Zoo in the 1960s and spray-painted “Cornbread Lives” onto the side of an elephant.

A throw-up is another form of tagging. It is usually a more significant size that is more sophisticated and may use more paints and colors.

A blockbuster goes up one more level of sophistication from a throw up. It is much bigger and often fills up an entire space, such as a wall.

However, like a tag and a throw-up, a blockbuster is still produced in a relatively short period.

The lettering of a blockbuster is often created in a block style, and the writer may use rollers. Eggs, Nekst, and Katsu, are examples of famous graffiti artists who create blockbuster works.

Wildstyle graffiti is also text-based, but it uses elaborate font styles that can be difficult to read.

The legibility doesn’t make wildstyle graffiti unappealing; it is generally perceived as one of the most visually attractive tagging styles.

Complicated and interlocked letters, spikes, arrows, and other decorative elements are incorporated into this complex artwork. 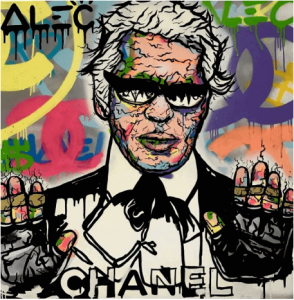 Heaven is very hard to get into, at least in the graffiti world. Heaven or the heaven-spot refers to graffiti art in hard-to-reach places.

These artworks are typically found very high up on buildings that are very difficult to get to, bridges, roofs, etc.

Graffiti artists who manage to create graffiti in a heaven-spot gain credibility from their peers.

Stencil graffiti has become incredibly popular. The artist known as “Banksy” has utilized the stencil style and brought it into the mainstream.

Stencils are shapes made of cardboard, paper, metal, plastic, or other materials. An artist will then spray against the stencil to create an image or text.

They can take the stencil and reproduce the picture again and again. Some stencils get rolled onto walls and other surfaces.

Some of the most recognizable graffiti names today are stencil artists, such as Banksy, Blek le Rat, Shepard Fairey, and Vhils.

Posters or paste-ups are a quick and easy way to put up pieces. These artists will create their artwork at home and then paste it up on walls and other public places.

Like stencil graffiti, you can replicate and mass-produce posters or paste-ups.

Unlike commercial posters, this artwork gets put up without permission, which classifies it as graffiti art. Famous poster artists include Eddie Colla, Lost Hills, and Pyramid Oracle.

Stickers are similar to posters in that they can be mass-produced and are not created “in the field.”

However, stickers are smaller than posters and do not require paste. Some stickers are simply tags drawn onto sticky labels, while other more sophisticated stickers are created using computer graphics and are more elaborate. Well-known sticker artists include Sheppard Fairy, ObeyGiant, and Ben Frost. 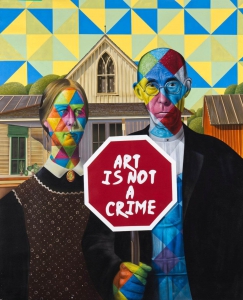 A ‘piece is a graffiti picture that has been painted freehand. The name, as you may have guessed, is short for a masterpiece.

These artworks contain at least three colors and usually take longer to paint than a tag. A ‘piece will often reach a level of public acceptability that most graffiti does not achieve.

A ‘piece created in an obvious place will gain respect from both the public and other artists.

It may be perceived as street art, assumed to have been painted with permission.

However, it is still illegal and gains respect from graffiti artists – because standing in public places painting walls without permission takes a significant risk.

3D graffiti creates an elaborate illusion and is also well perceived by the public. 3D graffiti pieces are usually visual scenes that create the illusion of a third dimension. 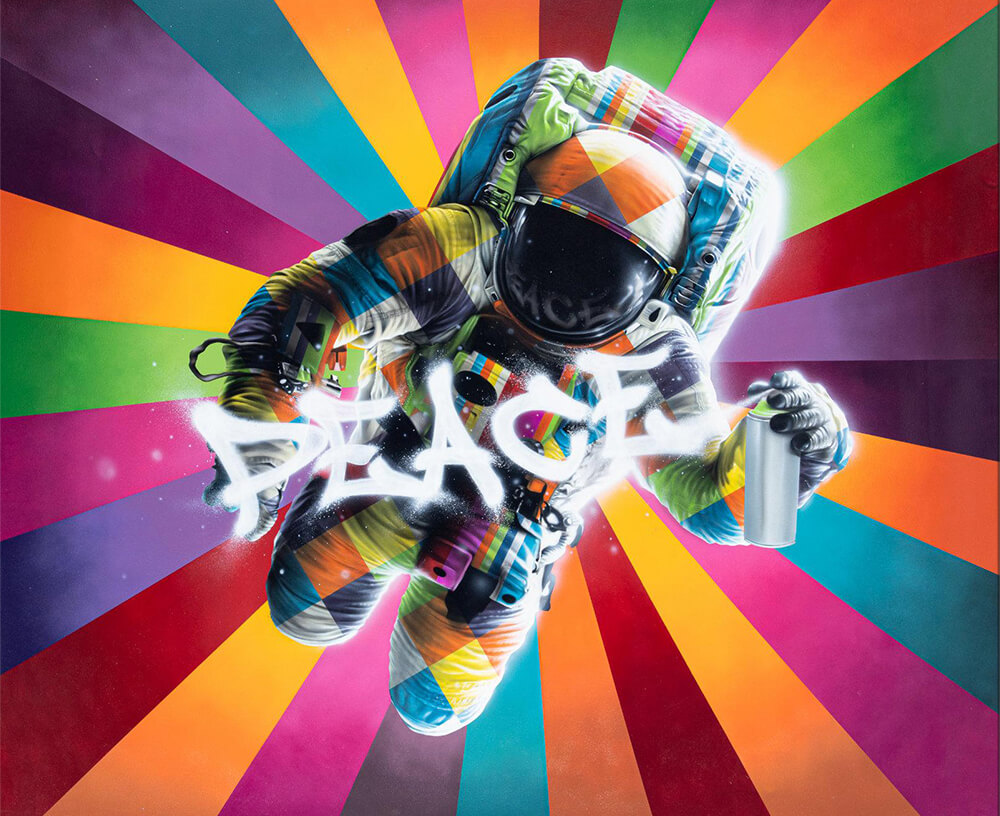 3D graffiti may cover multiple walls or spread out onto pavements and roads. Famous artists renowned for adopting this style include Scaf, Edgar Mueller, and Kurt Wenner.

Other Types of Graffiti

There are several other subcategories or specific use cases of certain styles within the ten main types of graffiti.

Other types of graffiti include gang graffiti, which may take the form of tags or symbols. Gang graffiti can demarcate boundaries, memorialize or recruit.

Latrinalia refers specifically to graffiti of any style that is put in bathrooms or restrooms. It can take the form of art, drawings, or words.

This style of graffiti is often done by amateurs, like tourists, teenagers, or other restroom users.

However, sometimes the work of a famous graffiti artist will show up in a bathroom. Some locations, such as famous bars or cafes, encourage visitors to graffiti their restroom walls.

Scratchiti is a growing trend in both graffiti and street art. It is a type of graffiti that is scratched into a surface.

This is similar to the ancient forms of graffiti, which were carved or incised into caves, buildings, stone, and trees.

What Is the Most Common Type of Graffiti?

Tags or tagger graffiti are the most common types of graffiti you will come across. Tagging or leaving a visual signature is also the oldest type of graffiti.

The earliest forms of tagging were seen in ancient times. The Romans and Greeks started writing their names and protest poems on buildings.

Carving your name into a tree or rock is also a form of tagging.

The tags and tagger graffiti we recognize first became common in the 1960s in Philadelphia and New York.

By the 1970’s the trend took off. People began writing their names, or ‘tags’, on buildings and subways worldwide.

Over time, graffiti styles have evolved from tagging to become more elaborate or cross into the realms of street art. However, tags are still the most recognized and original form of graffiti.

Not everyone likes or appreciates graffiti, but that is not the purpose of this style of artwork. Graffiti is a statement created for self-expression, often by groups who are disenfranchised.

Graffiti artists do not seek fame from the public or mainstream appreciation.

Graffiti is typically only created to speak to other artists in the community. Graffiti artists typically do not seek or want a public understanding of their work.