It’s common to conflate graffiti and street art, with the two terms used interchangeably to refer to art found on the street.

However, there are significant differences that define and separate the two styles. This article explores the similarities and differences between graffiti and street art. 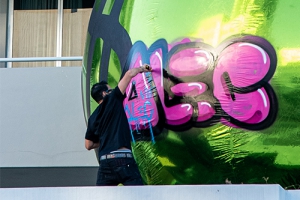 What is considered street art?

Street art is artwork that is independent visual art created in public locations such as the walls of buildings for public visibility.

Street art can be used interchangeably with the terms “independent art”, “post-graffiti”, “neo-graffiti”, and “guerrilla art”.

Murals have been around since the renaissance, and the term mural is often used interchangeably with street art.

Murals are usually commissioned and can be both outdoor and indoors. One example is Mexican muralist, Diego Rivera who painted on the walls of Rockefeller Center.

However, street art’s definition is broader and can also include three-dimensional artworks.

Street art is more popular and widely accepted than graffiti art. It is often easier to understand street art, and the work is more enjoyable for an audience. It conveys a message and engages the public.

What is considered graffiti art?

While murals have existed for many centuries, the idea of taking over the streets with art started with graffiti.

In this sense, graffiti predates street art, and many street artists draw their inspiration from graffiti.

Graffiti is a contemporary art form defined by words and or images written in public places. Under most laws, this expression is considered vandalism, while others appreciate it as a form of art.

The most recognizable form of graffiti art is a tag, but other forms include throw-ups, blockbusters, wildstyle, heaven, stencils, posters or paste-ups, and stickers.

Much of the culture of graffiti art revolves around the challenge of tagging in difficult locations. For example, ‘heaven’ is a tag that’s painted in a challenging place to reach.

The artist gains a lot of respect from other artists if their work is in a hard-to-reach location, such as on a subway car or tall building.

Graffiti artists do not seek or want a public understanding of their work – even though they create their art in public.

Graffiti is typically only created to speak with other graffiti artists in the community.

Most graffiti artists aim to remain anonymous, so a graffiti artist who is commercially famous or well-known is perhaps already crossing the line to street artist.

However, there are many pure graffiti artists who are well-known and respected under their graffiti monikers. These include Alec Monopoly, Utah and Ether, EGS, Katsu, Horfe, Nekst, Bonos and Revok.

What are the similarities between graffiti and street art?

Graffiti and street art are often confused because there are many similarities between the two art forms, including location, politics, and materials.

The most significant similarity between graffiti vs street art is that both forms of art are displayed outdoors, in public and private places. They are both free to view, making them valid forms of public art.

Both forms of art are regularly used as a vessel for political and social commentary and activism.

The art of the street is often a means for underrepresented or denigrated groups to get an uncensored message out to the masses.

Many commercially established artists start as graffiti artists before expanding their art to broader styles and transitioning to street artists.

Banksy, perhaps the most well-known street artist globally, is an illegal artist using a fake name.

These traits make Banksy more akin to a graffiti artist by common definition, yet his work has been exhibited and commercialized, traits of a street artist.

As an appreciation for street art has increased, some graffiti artists who previously had to work illegally have chosen to cross over to producing commissioned or approved artwork.

What is the difference between street art and graffiti?

There are several differences between graffiti and street art, including the naming of the styles, materials, legality, and public perception.

Graffiti and street artists refer to themselves and their work differently. These differences in naming set them apart as two distinct art forms.

Tags and throw-ups, bigger and more elaborated artworks, are two techniques that graffiti artists use to paint their names.

Materials are another way in which graffiti and street art differ. The artist can choose to work with any material they like, but graffiti is typically created with spray paint.

Spray paint is affordable, easy to carry, and quick-drying – ideal for a graffiti artist who doesn’t want to get caught making their art.

However, you may observe other materials on the streets as this art form becomes more mature and diverse.

Paste-ups and multimedia are growing in popularity; stencil use, vinyl or eggshell stickers, clay, markers, fabrics, wool, and textiles are now seen in street and graffiti art.

Graffiti artists usually use at least some lettering in their work, even if they have expanded to include other designs as well.

Street artists typically cover a more comprehensive range of visuals and are often more akin to traditional muralists creating an entire scene on a wall. 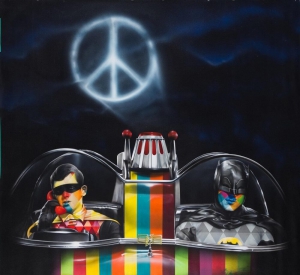 The legality of street and graffiti art is a controversy that separates the graffiti and street art industries.

The lawfulness of the artwork is what some people believe elevates street art above graffiti.

Whether you paint with or without permission is an ongoing argument in the artistic community.

There is a common perception that graffiti is illegal and a nuisance, while street art is commissioned or welcomed.

However, Banksy, one of street art’s most admired and renowned artists, has painted his work illegally on several buildings.

Typically, graffiti writers or artists do not ask for permission, whether using public spaces or private properties.

The golden rule of graffiti is not to get caught, and these artists often work in stealth, under cover of darkness.

On the other hand, street artists can and usually do seek permission to paint. They will submit their portfolios to different street art festivals or get permission from the property owner before starting a mural.

There are even street art festivals where artists leave their signature in a welcoming way, including Pinta Malasaña, CALLE Lavapies, Upfest, Nuart, and Mural Festival.

Some towns or business districts will commission street artists to beautify neighborhoods or create a drawcard for tourists. These include destinations such as The Jersey City Mural Arts Program, Bushwick Collective, or Miami’s Wynwood Walls. 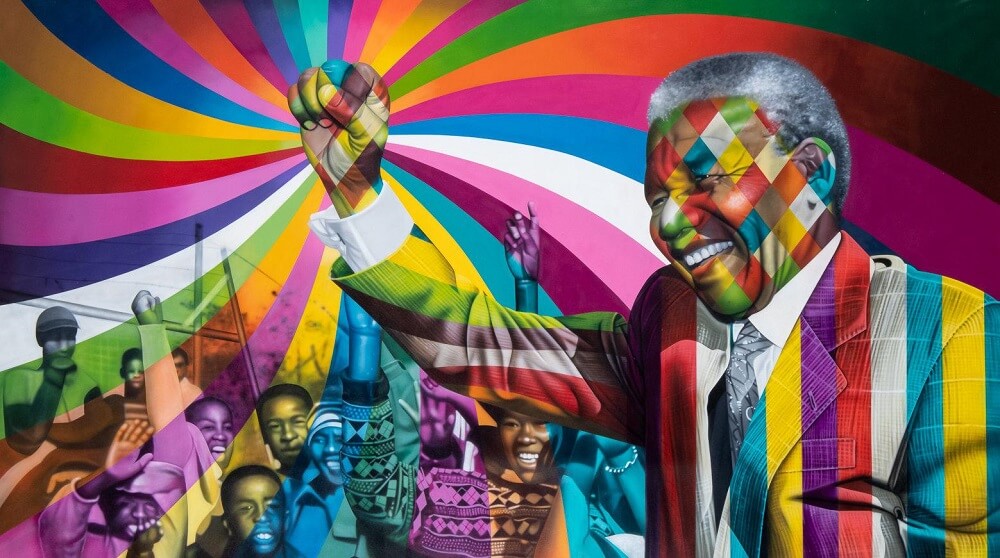 There are different cultures and practices in the street art and graffiti communities, and these cultural differences often lead to clashes between the two. For example, it is common for graffiti artists to tag on top of other writers’ works, which is an accepted form of aggression within the culture.

Graffiti culture can have rivals, and artists can stake or claim an area. However, tagging on top of a street artist’s mural is not as accepted or welcome.

The illegal risk that comes from tagging is part of its counter-cultural edge. By comparison, many graffiti artists perceive street art to be a symbol of gentrification.

Perhaps what most separates street art and graffiti is public perception and opinion. Street art is usually welcomed and encouraged as a way to beautify a neighborhood, while the perception of graffiti is quite the opposite.

Street art has a history of being used to improve and uplift areas of towns or cities.

Regions that are heavy with street art become a drawcard for tourists and visitors, so artists are often asked to put together these artworks.

Because the public perceives them as artists, not vandals, street artists willingly sign their work using their real names.

Graffiti artwork is not as enjoyed by the public and is not intended to be aesthetically pleasing for passers-by.

Graffiti artists do not necessarily seek to be legalized, which would take their art into the mainstream. The act of rebellion is a key part of the culture of graffiti art.

Art of The Streets

Although street art and graffiti are different, they also have their similarities. Both types of art can be seen side by side – or even layered on top of one another. These two styles of art are both essential contemporary art and cultural trends. 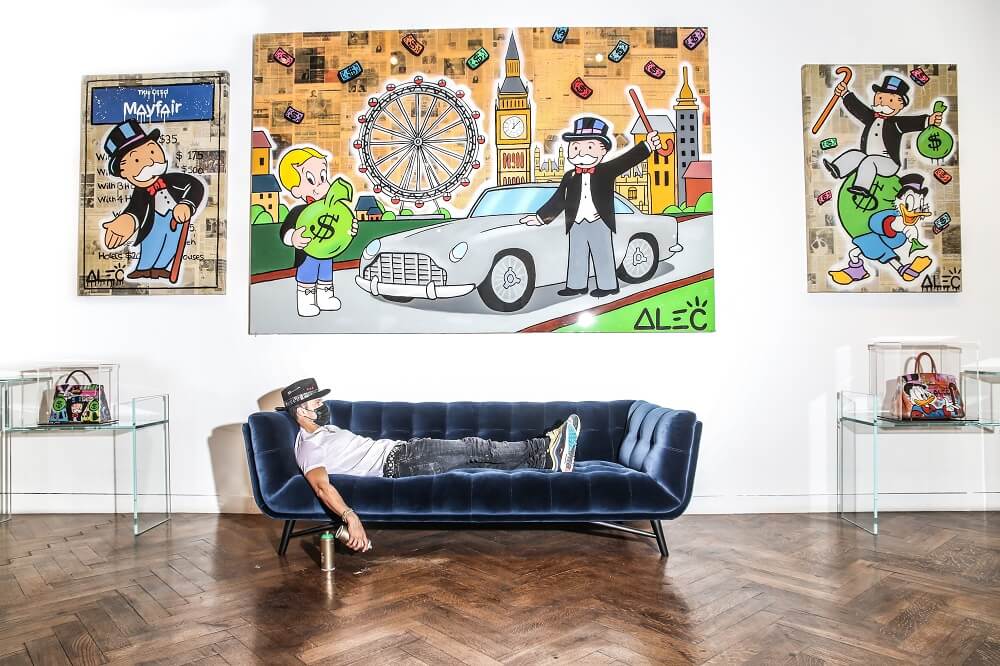 Art is always subjective. Many people still view commissioned street art as vandalism, and conversely, graffiti is art if you define it as such. 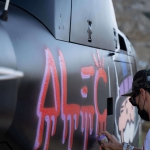