Think large and luxurious! American culture celebrates the biggest and the best. This is a country where people come to express themselves and live “The American Dream.” This week Eden Gallery, along with the rest of the US, is celebrating the Fourth of July, the birth of American independence with fine art!

Alec Monopoly, the assumed alias, is originally from New York City, and now runs his studio out of Miami. The artist is well-recognized for his playful depictions of familiar characters from the quintessentially American board game Monopoly.

Starting his career in the framework of street art, Monopoly, to this day, continues to use spray-paint to depict bright and cheerful scenes. Monopoly’s unique take on life mimicking a board-game is playful and thoughtful. He uses typical American street art styles and combines it with the juxtaposing images of American luxury. His painted characters are putting cash in the bank, enjoying fine dining, and visiting famous American landmarks. 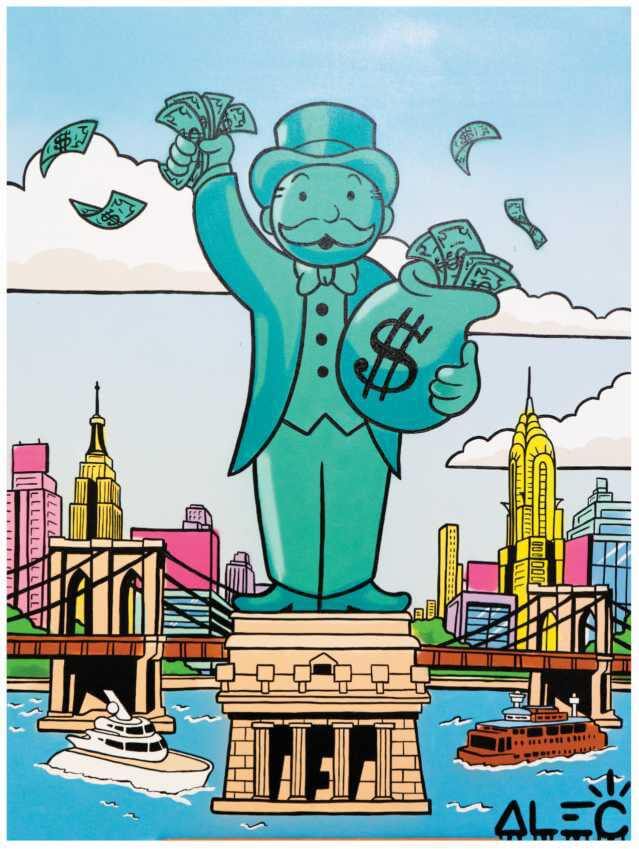 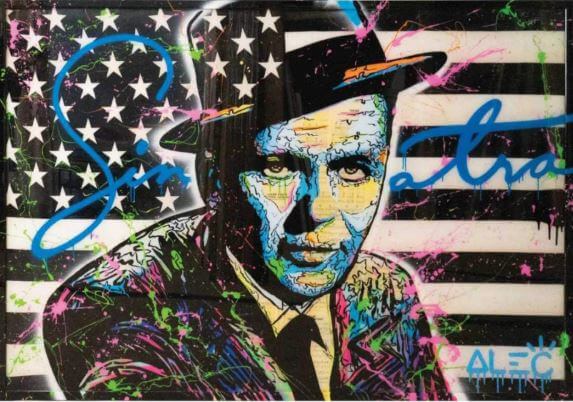 Often Monopoly’s art is symbolic of the modern culture of celebrity glam. The artist often depicts typically American characters living up the American Dream. They are the embodiment of what America has to offer, why people choose to come to this new world where they can have the chance to make it big. This week Monopoly’s characters celebrate the freedoms of America along with the rest of the country.

David Kracov admittedly loves the energy and electricity of New York City, a vibrant city where he spent much of his childhood visiting. When he was only 11-years-old he saw his first play on Broadway, as a teenager he happened upon Keith Haring spray-painting in the subway. David Kracov considers himself a true nitty and gritty New Yorker. 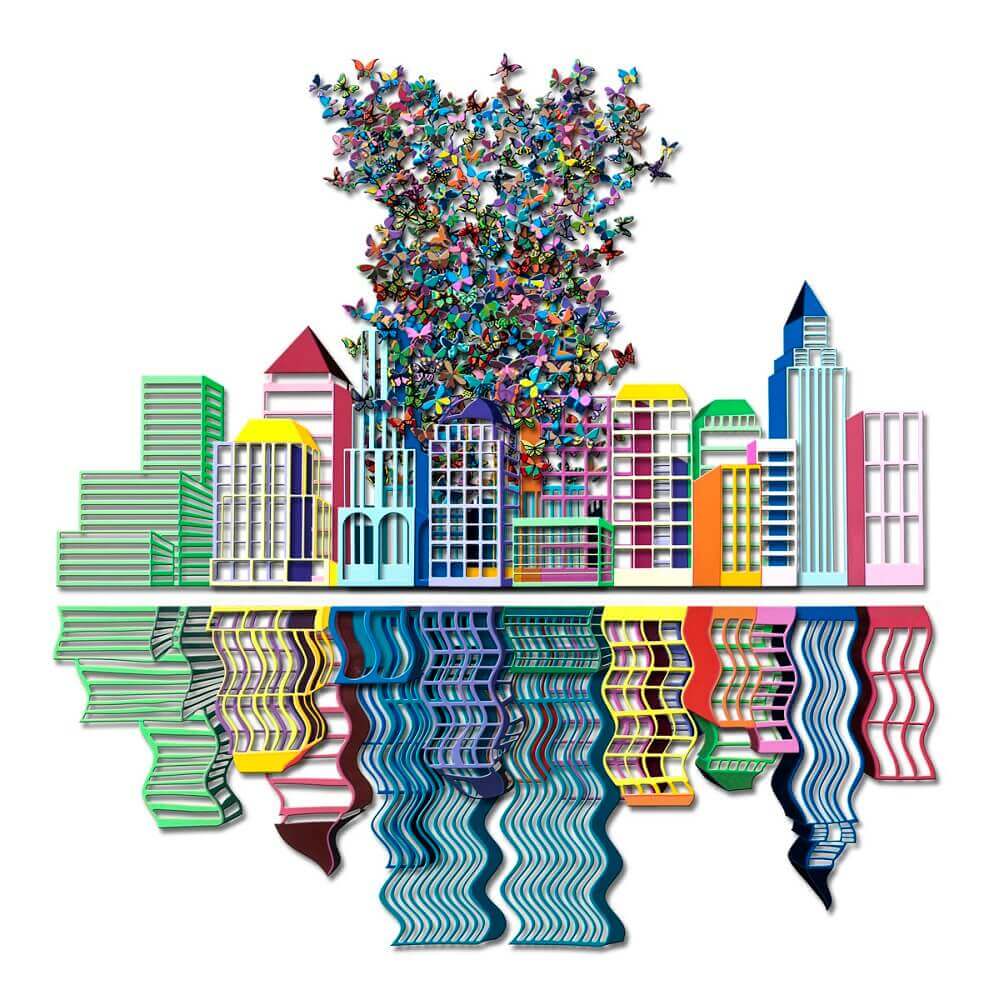 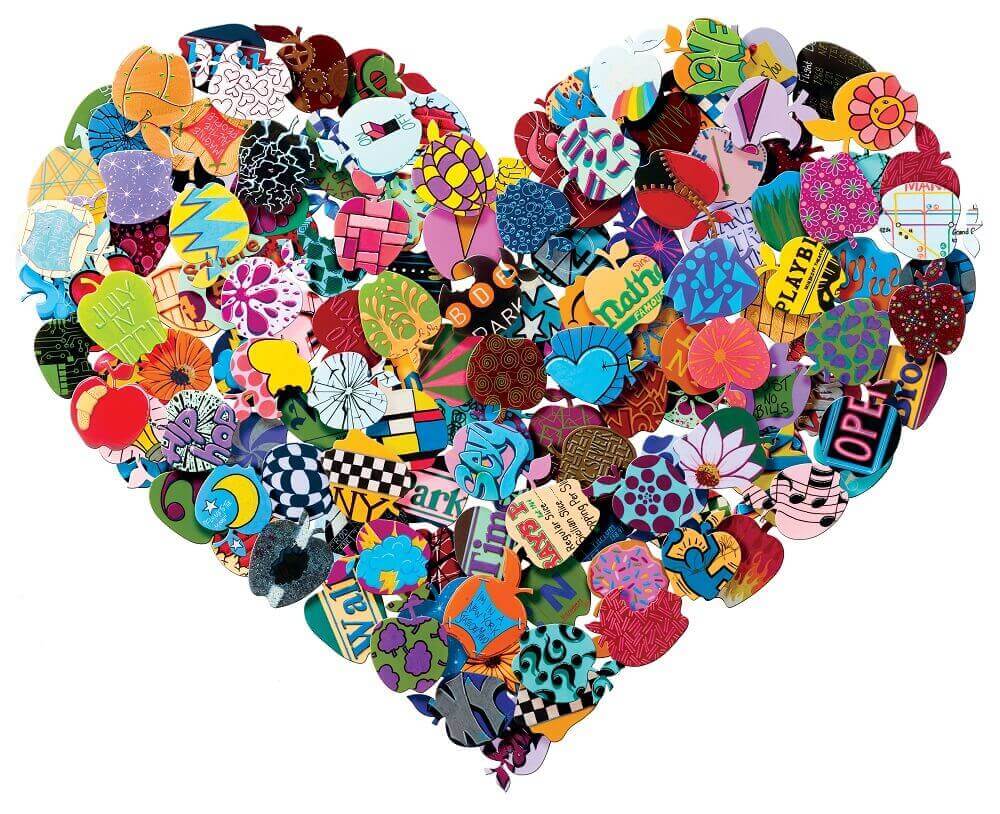 One of Kracov’s most significant inspirations is architecture. Growing up in and around New York City, Kracov had the wonderful opportunity to visit some of the greatest, iconically American buildings. The skyscrapers and bridges of New York City, the classic Georgian architecture of the original colonies in Boston, and of course, the art deco structures boasted by both cities. See how the artist combines his uniquely colorful perspective with the cities’ artistic skyscrapers in his architectural wall sculptures.

The mixed-media artist SN combines his talents as a photographer and painter to create uniquely magical compositions. His use of mounted butterflies ad a lightness and whimsical feeling to each artwork.

The emblem of the nation, the bald eagle, also known as the American Eagle, is majestic, fierce, and proud, an apt symbol for America’s strength and freedom. SN paints the symbolic bird on an azure backdrop over a canvas of American one-dollar-bills. Laid horizontally, the bills resemble the stripes of the American flag. The bird looks off into the distance, seemingly ready to take flight, to enjoy his freedoms as an American. 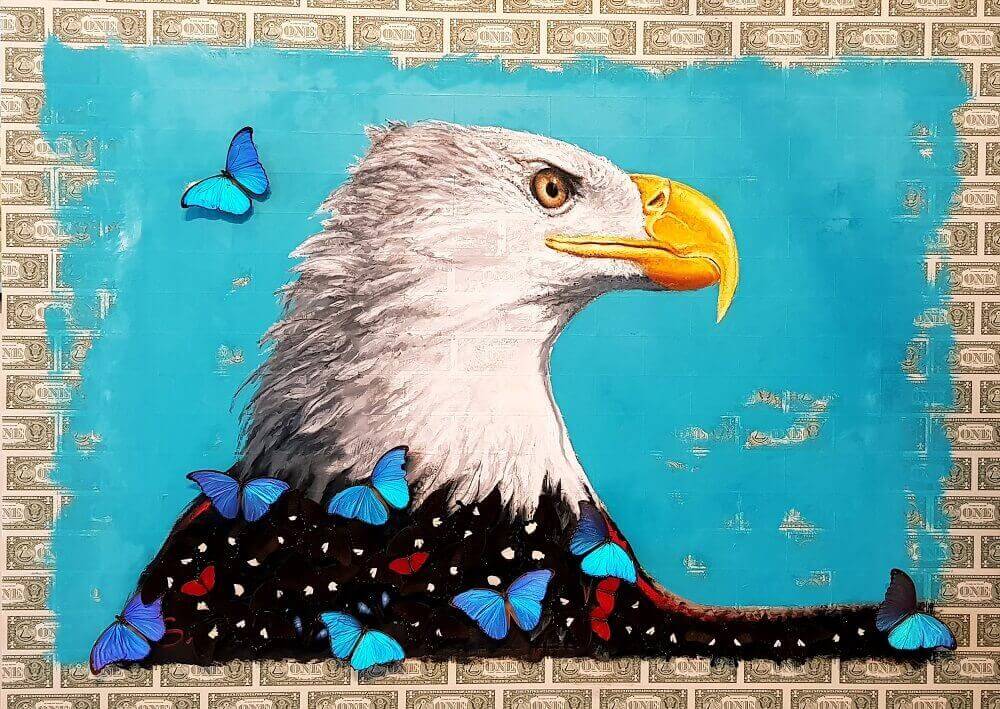 Combing the use of charcoals, paints, and mounted butterflies, SN’s twist on classic animal portraiture celebrates the Fourth of July in an artistic way. Explore SN’s full collection exclusively at Eden Gallery here.

The contemporary artist Tommy delivers nostalgically American art. He takes the viewer back to a 1950s America where Coca-Cola was sold in curvy glass bottles, and people still went to Drive-In theatres. 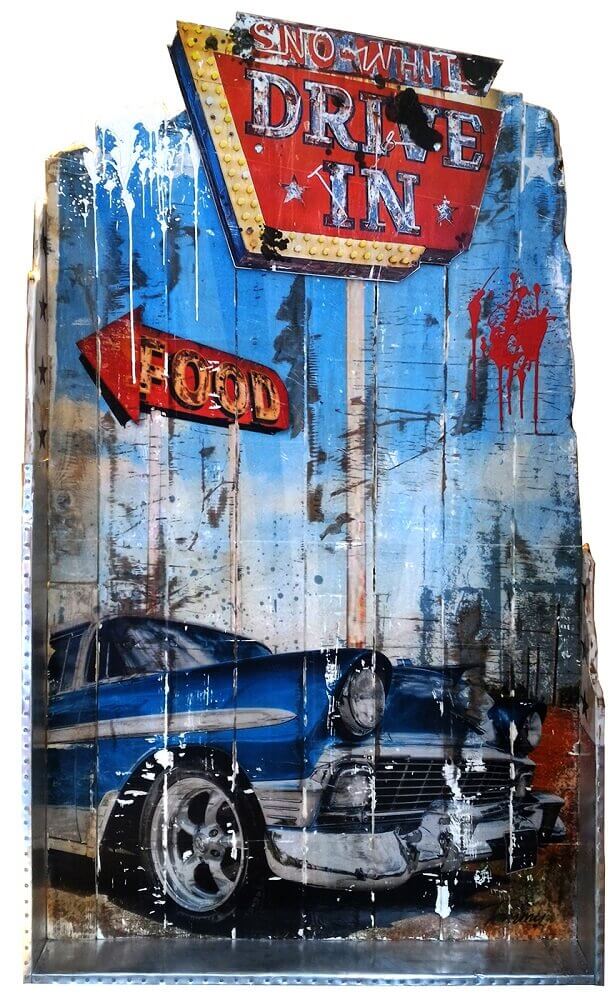 Tommy brings us back to a nostalgic America, just in time for the Fourth of July. Explore his collection here.

Using recycled wood, Tommy transforms the materials into brightly colored works of art. He combines American artists’ influences such as Roy Lichtenstein and Robert Mars in his layered and uncommon approach. Painting with red, blue, and white, every one of his wall artworks are reminiscent of the American flag, sometimes he even adds the stars and the stripes to make the reference even more apparent. 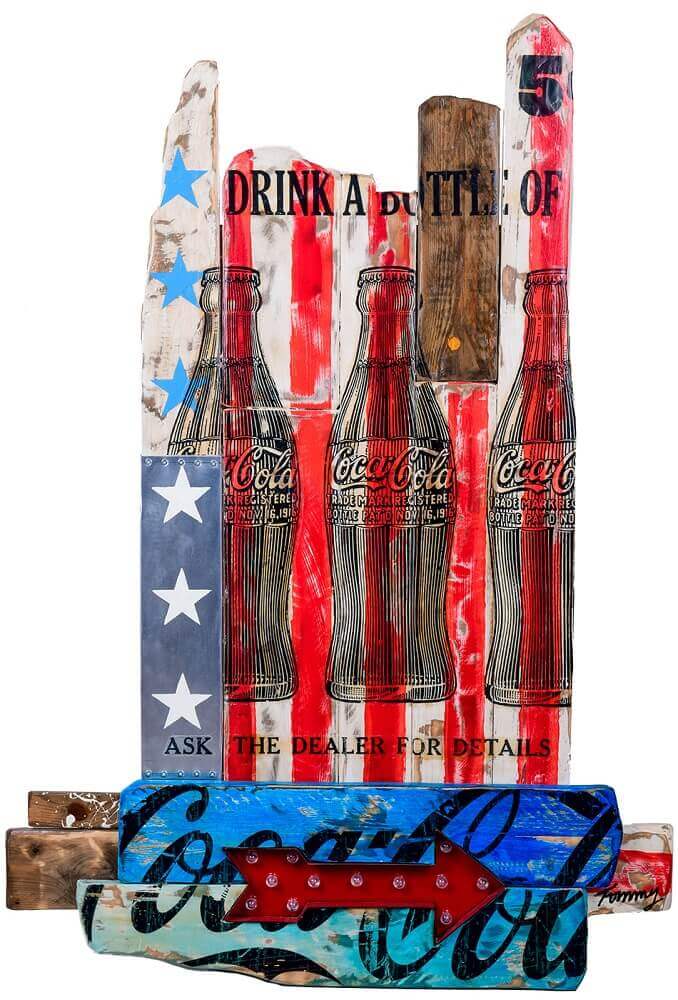 One of the world’s most recognizable cultural icons, Mickey Mouse, is quintessentially American. His fame has lasted generations and has crossed to cultures around the world. Still, almost a full century after his inception Mickey Mouse is a classic American icon. 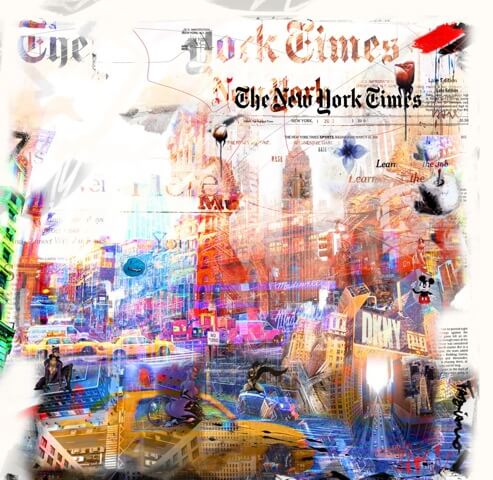 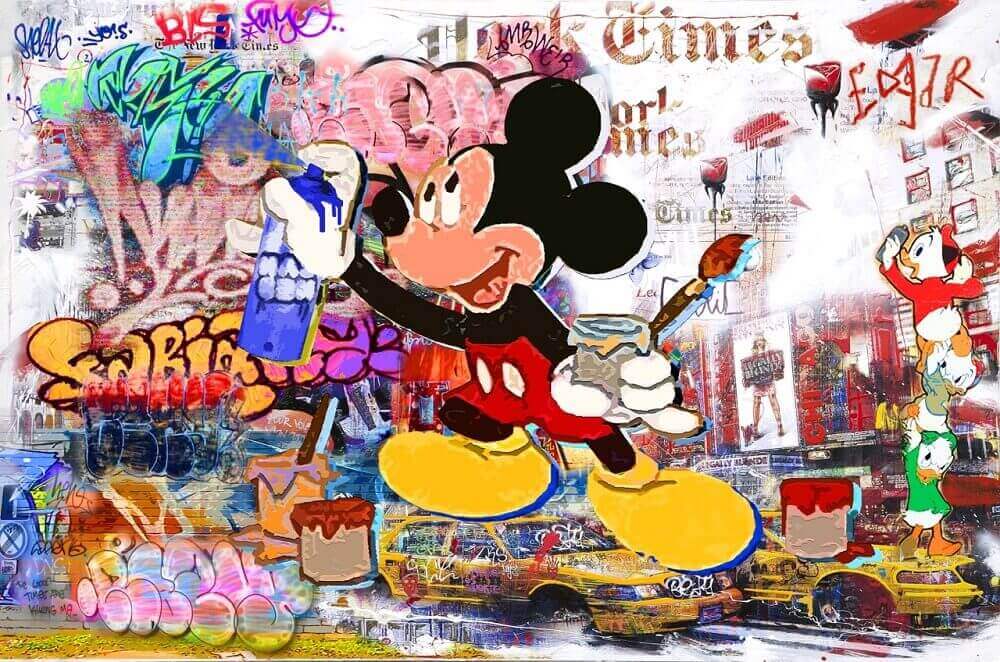 Although he is not from New York, Fabiano has traveled to the Big Apple many times. Many of his collages on wood or canvas evoke the spirit of this bustling city. Overlaid with recognizable streets and buildings, the artworks stimulate the viewer’s senses, bringing those New Yorkers back home and those who are not from the state a sense of longing.

Although many of the live performances and big parties have been canceled this year, Eden Gallery is still honoring the Fourth of July with a new collection! Celebrating stars, stripes, and freedom, this is Eden’s artists take on America. Explore Eden Gallery’s full collection here!