Breaking the Bank on Bond Street

Eden Fine Art announced on Alec Monopoly’s London Exhibition, BREAKING THE BANK ON BOND STREET, earlier this year, preparing London for an outstanding display of Street Art on May 31st, 2018. The show coincided with the gallery’s official celebration of the opening of their gorgeous, expansive four-floor New Bond Street gallery in Mayfair. The gallery invited special guests and collectors to the opening and gave the Eden Fine Art community the opportunity to win tickets to preview the exclusive and much-anticipated new collection. When the guest list filled up fast, the gallery decided to open the exhibition a day early with a pre-show on May 30th, just one day before the official opening, where Alec Monopoly fans had the opportunity to meet with the artist along with his newest and never-before-seen artworks. The exhibition included a reception in honor of the collection’s release. 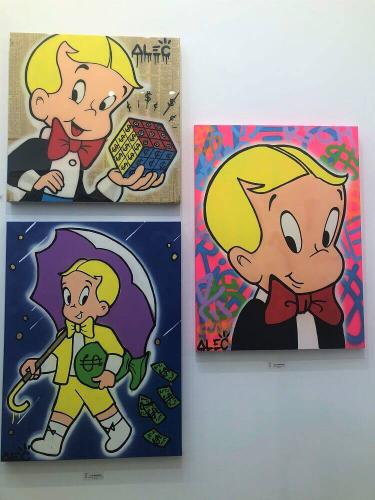 The Mayfair space made sure the event reflected their Contemporary Pop Art values, and BREAKING THE BANK ON BOND STREET included more than a high-profile guest list and a new collection. The gallery featured a modern take on the classic English telephone booth, ‘monopolized’ by Alec and painted on all sides with the Monopoly’s classic characters and colors, reminiscent of Alec’s earlier days as a graffiti artist in NYC. The gallery invited its own “Queen’s Guard,” and made sure every sweet tooth was satisfied, with a buffet of candy so colorful, it could have been another piece of art.

Collectors, guests, and fans were invited to discover and purchase pieces from the new collection, available exclusively through Eden Fine Art and their galleries. The collection is selling quickly, and many of Monopoly’s works were sold during the exhibition, marking continued success for the celebrity graffiti artist, and his new partnership with Eden Fine Art.

After the success of their London events, the gallery has made the decision to leave the show up for an additional two weeks following its opening in order to allow Alec Monopoly fans to see BREAKING THE BANK ON BOND STREET.

Interested to see the exhibition in your own eyes?
Click here and explore photos from the two London events!