What Is Pop Art?

Pop art is an exciting, colorful, and vibrant art movement that emerged in the UK and the US during the 1950s. When Pop Art first emerged as a style, it was radical and shocking, a stark contrast to the abstract expressionism style that preceded it. 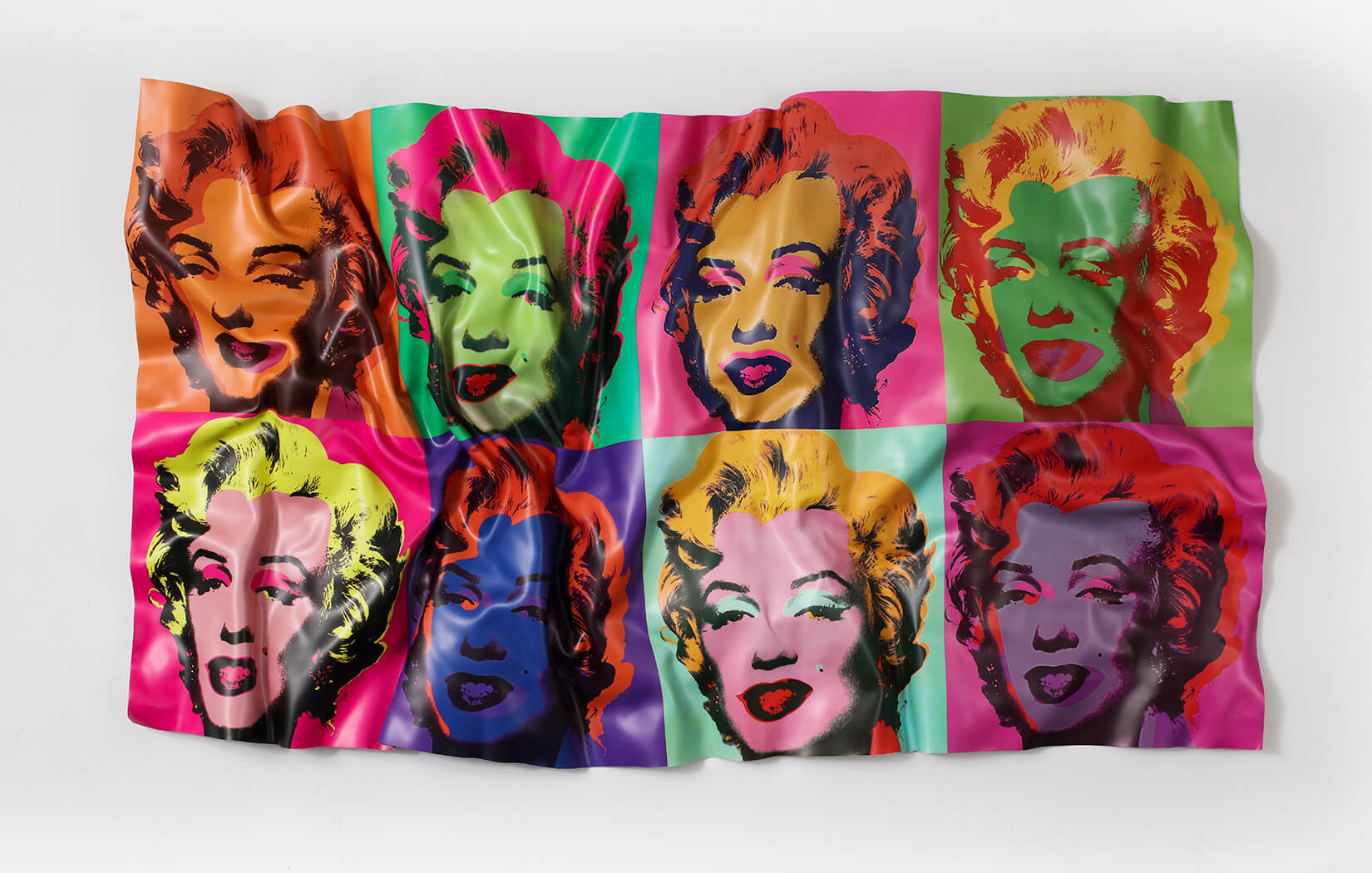 And yet, even 70 years later, Pop Art remains both incredibly popular and one of the most influential modern art movements of the 20th century.

Pop Art is the name given to a style of artworks created in the UK and USA from the mid-1950s through the 1960s. The style of Pop artists is characterized by their inspiration from sources in popular culture.

Why Is It Called Pop Art?

When it emerged on the scene, Pop art was not a popular style, as the name might suggest. Instead, the movement takes its name from the subject matters which inspired it. Film, comics, commercials, and other forms of popular culture.

Pop Art crosses mediums and is observed across sculpture, paintings, shadow boxes, mixed media artworks, and drawings. What unites Pop Art artworks is the subject matter and themes that inspire them.

Pop Artists changed the perception of what art is. They broke down the barriers between so-called “high art” and commercial art or “low art,” seen in popular culture. Pop artists took inspiration from film, comic books, advertising, product packaging, and other commercial designs. 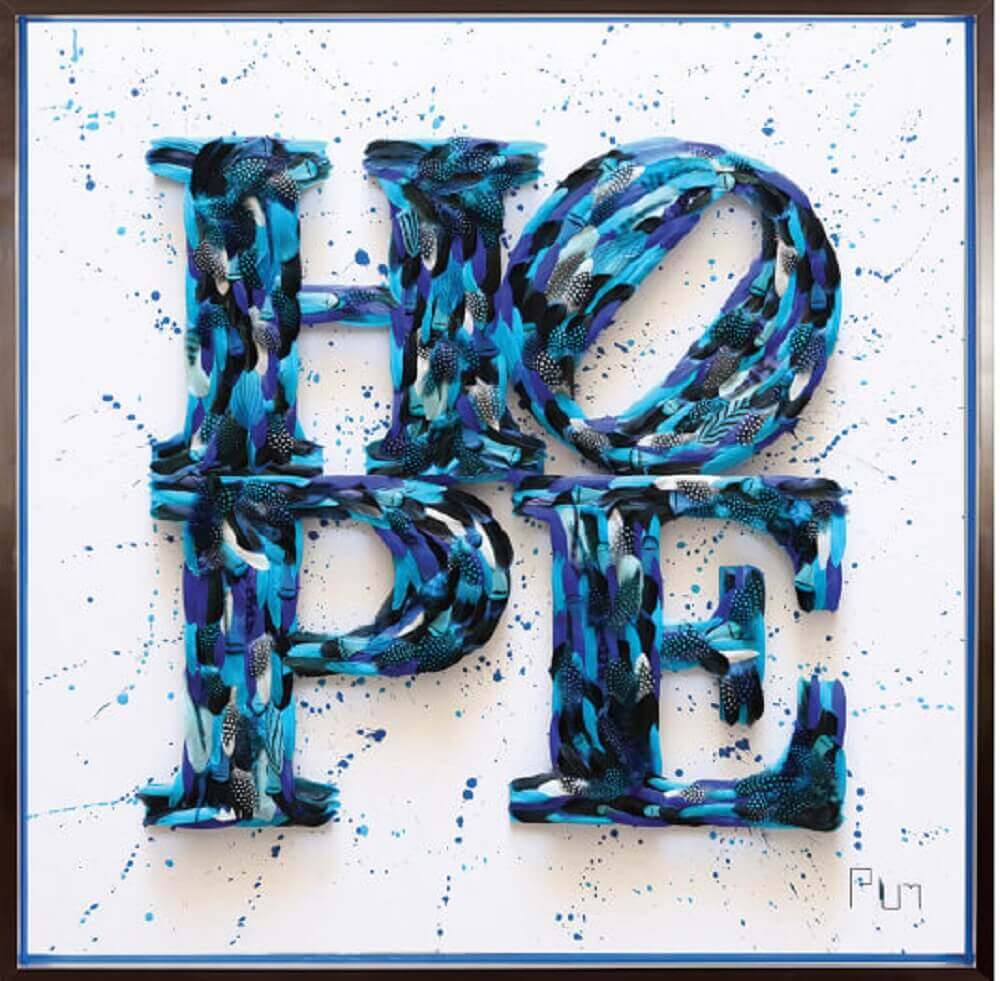 Pop Art is often produced at a low cost, and instead of creating a rare “masterpiece,” Pop Artists often mass-produced their artwork and made it a commodity.

Pop Art often appropriates imagery and techniques from other art forms found in popular and commercial culture. Mixed media and collage were popular formats amongst Pop Art artists, who often used a mixture of painting, photography, and collage in a single artwork.

Pop Art can be fun and witty or even gimmicky. But it can also have strong undertones of social or political commentary. The movement gained traction at a time of significant cultural change and upheaval. Pop Art artists paved the way for contemporary artists to use artwork as a means for social critique.

What Was Pop Art Rebelling Against?

The Abstract Expressionists made esoteric artwork that was understandable by only an enlightened inner circle. Its meaning was often incomprehensible to anyone other than the artist. The Pop art artists rebelled against this by producing artwork that was recognizable to the masses.

Pop Art was the last movement of the modernist era. It started a trend, now seen in many contemporary artworks, of using artwork to comment, critique, or reflect on society through insightful observation.

What Is Unique About Pop Art?

Part of what makes Pop art unique is that it rejects the notion of uniqueness. Instead of trying to be unique, pop artists embraced mass-production and elements from popular culture. 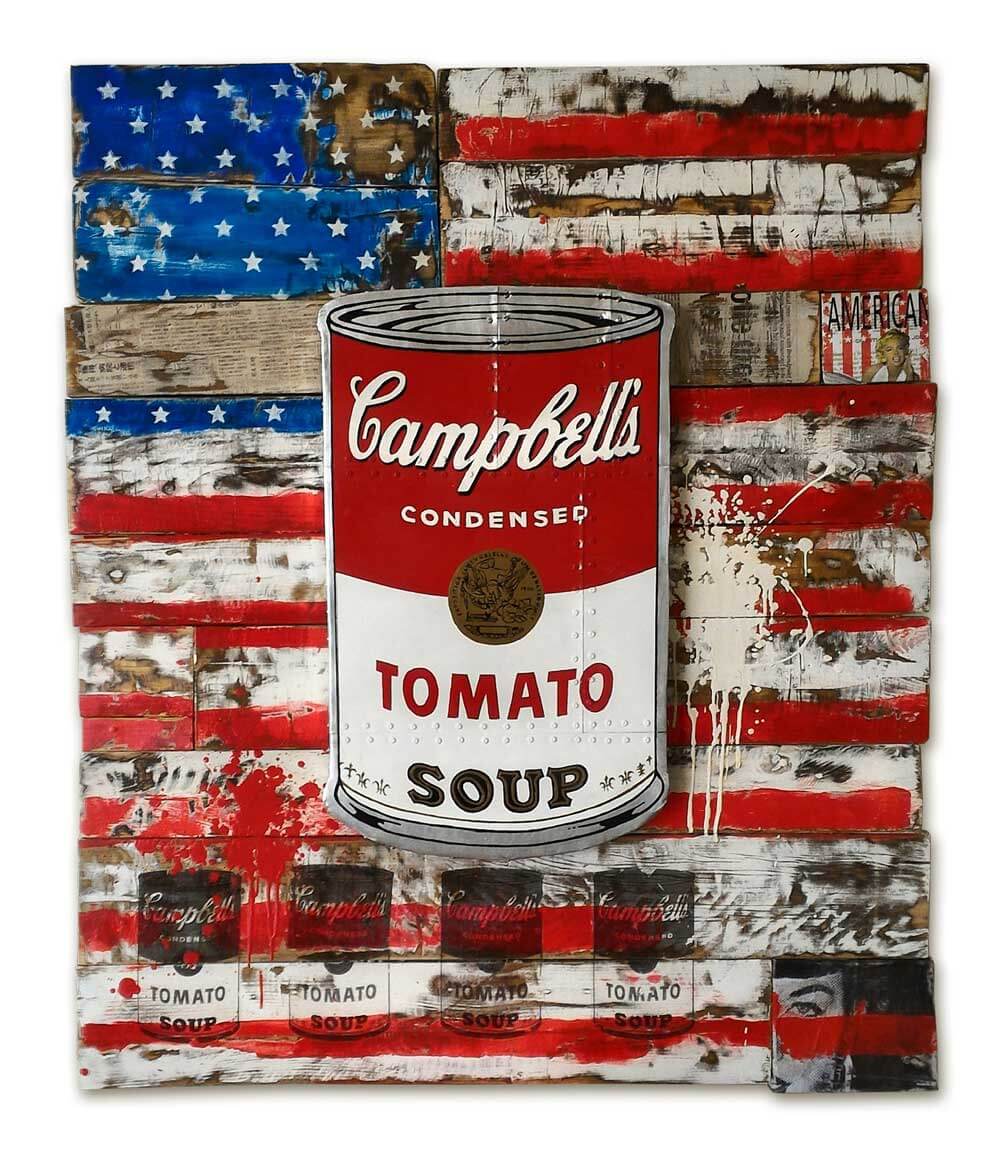 Artworks in the Pop art style often employ commercial techniques such as silk screening to produce multiple replicas of artwork. The use of repetition and mass production subverts the narrative that art should be rare or exclusive. Pop Art parodies and democratizes art to make it part of every day, available and accessible to everyone.

What Are the Characteristics of Pop Art?

Pop art takes influences from a wide variety of styles and is not united by a single technique. Andy Warhol’s screenprints of Marilyn Munroe or the Cambel Soup Cans are some of the most recognizable examples of Pop art. However, Pop art often uses mixed media and can also be observed in the sculptures of artists like Claes Oldenberg or Jeff Koons.

What Are the Elements of Pop Art?

The elements of Pop art were described in 1957 by Richard Hamilton, one of the founders of the movement.

Neo Dadaism in Pop art focused on the use of found or known objects in artwork. This style broke down barriers between art and the everyday.

This style was employed by artists such as Jasper Johns, who made paintings depicting “things the mind already knows,” such as flags or numbers.

Pop artists like Richard Hamilton and Eduardo Paolozzi made collage one of the most recognizable styles of Pop art. These artists used clippings from magazines and newspapers and incorporated them into artwork to create a narrative or commentary on modern life or culture.

Pulp culture art is characterized as artwork that takes a style of another medium, e.g., comic book art, and imitates it on a different medium. 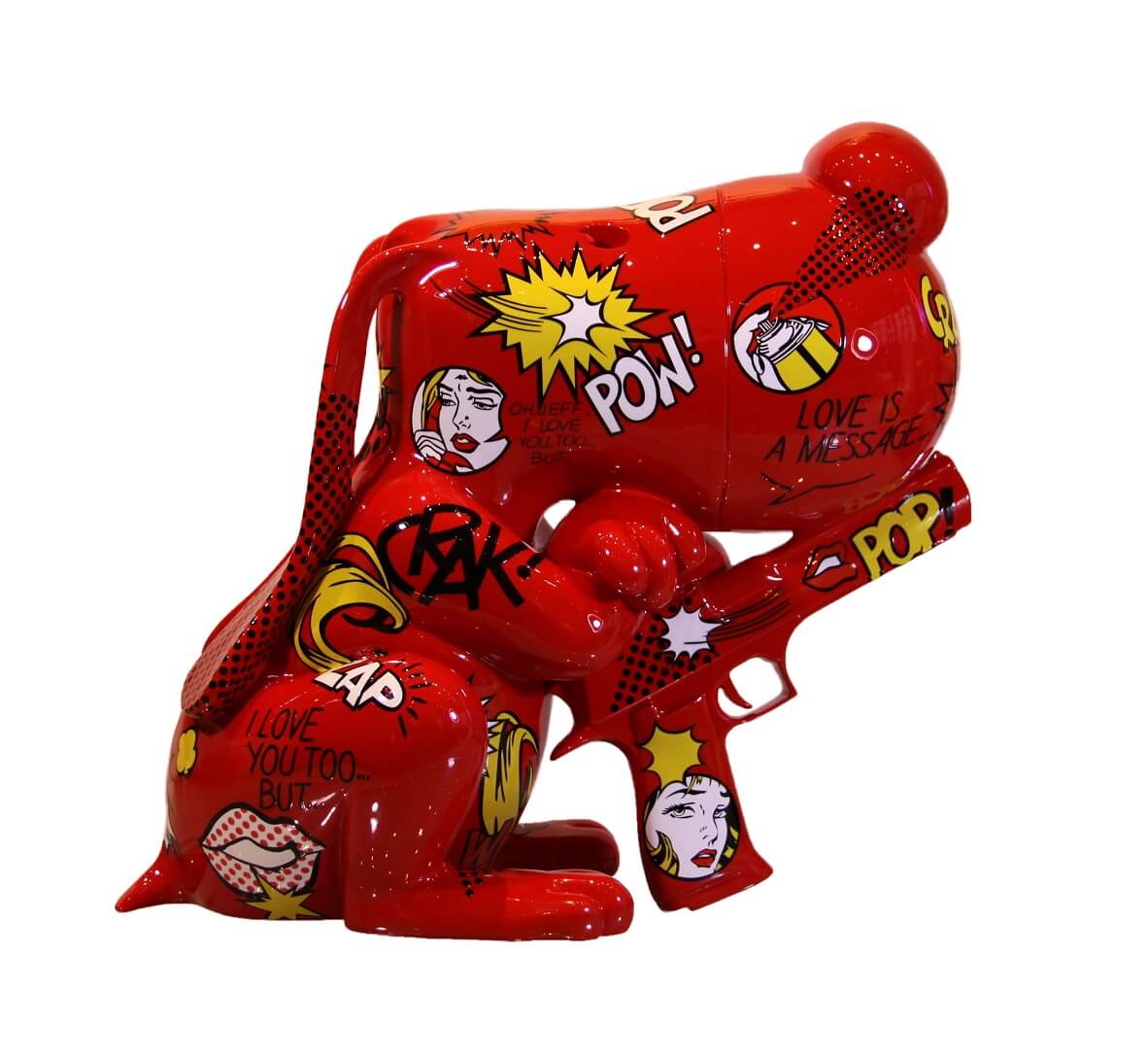 Many Pop Art artists produced multiple versions of their artwork. But Andy Warhol’s silkscreens are the most well-known artworks to be repetitively produced.

Warhol used mechanical reproduction as a way to reject the notions of artistic genius and authenticity.

Sculptors within the Pop art movement explored many of the same themes as painters but in a different form.

Claes Oldenberg took everyday objects and turned them into oversized sculptures. Oldenburg satirized simple, everyday things, like ice cream or a clothespin, and depicted them in monumental proportions.

Many well-known pop artists have become household names. The most recognized Pop art artist is arguably Andy Warhol, but other famous Pop art artists include: 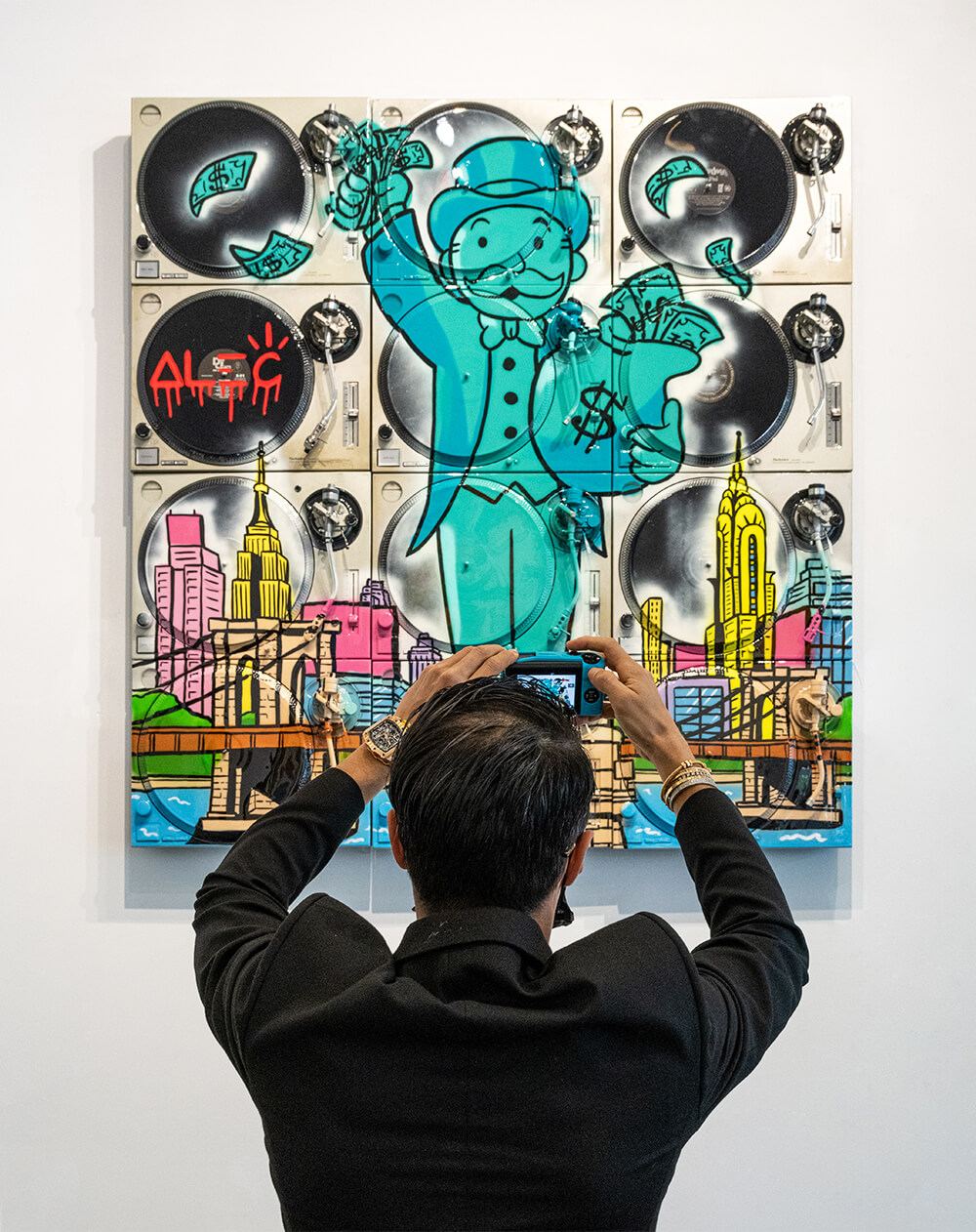 What Is the Most Famous Piece of Pop Art?

The most famous or recognizable piece of Pop art is Andy Warhol’s iconic Marilyn Diptych. Warhol created the Marilyn silkscreens in 1962, and much of their fame comes from both the instant recognition of Marilyn Munroe as the subject matter and Warhol’s own art celebrity.

Why Is Pop Art So Popular?

Pop Art remains a popular style of art because it uses recognizable and relatable iconography and themes. It’s easy for an audience to connect to a piece of artwork because they can often find familiarity within it. It is a popular choice for private collectors.