Perhaps owing to the incorporation of commercial images, Pop art has become one of the most recognizable styles of modern art, filling modern galleries in forms that range from sculpture and acrylic to avante garde and performance art. So what’s it all about? 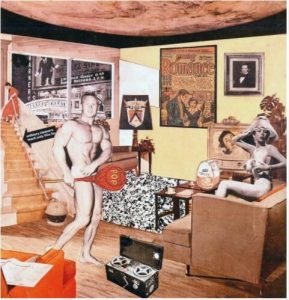 JUST WHAT IS IT THAT MAKES TODAY’S HOME SO DIFFERENT, SO APPEALING?
Richard Hamilton  (1956)

Pop Art began in the 1950s and 60s as a visual art movement in Britain and the US characterized by the sense of optimism in the post World War boom in consumerism. The movement presented a challenge to established traditions of Fine Art by shifting from elitist images to popular imagery, emphasizing the banal or kitschy elements of world culture, such as advertising, comic books, often highlighting notable figures, movie stars, and even mundane objects, most often through the use of irony. The movement was concurrent with other post-war movements such as Pop Music, embodied by figures like Elvis Presley and The Beatles. 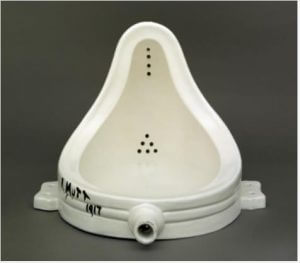 First coined in 1954 by the British art critic Lawrence Alloway, the word “POP” was used to describe a new type of art that was inspired by the imagery of popular culture. Post World War consumerism flipped the world upside down, and while politicians were re-drawing maps of Europe and uniting nations to form coalitions in effort to maintain international peace, Artists were grappling with the mending populations of their respective countries. The UK was an economic mess, devastated by the toll of WWII, while the US, spared of civilian and industrial ruin, had a post-war economy that was booming and at the time began producing almost half of the world’s industrial output. Pop Artists reacted to these realities, building on wartime art movements such as Duchamp’s Dadaism in Britain and Pollock’s Abstract Expressionism in America. 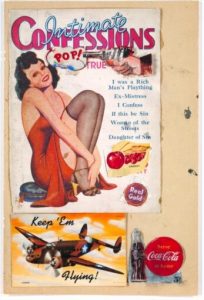 I was a Rich Man’s Plaything
Eduardo Paolozzi (1947) 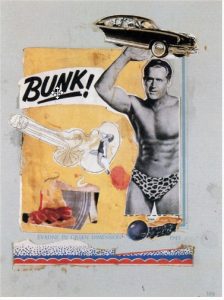 Although Pop Art is usually associated with the work of American artists such as Andy Warhol and Roy Lichtenstein in the 1960s, British Pop Artists actually sowed the seeds of the movement about a decade earlier. With eyes on the booming American economy, British Pop Art grew out of a bankrupt post-war economy’s obsession, envy, and sometimes satirical romance with the west’s consumerist paradise. This, combined with the Dadaist movement’s glorification of found objects just a few decades earlier, provoked British Pop Art began to honor the object as art, specifically those of popular culture, such as icons of American post-war consumerism.

Heralding the British age of Pop Art was the Independent Group. Richard Hamilton and Eduardo Paolozzi were among the founding members of a collective of artists, architects, and writers who departed from a traditional Fine Art approach in favor of new techniques such as collage and commercial screen printing, purposefully breaking down old orthodox traditions of art, design, and culture. Paolozzi, famously created a series of collages from American magazines that he received from GI’s still resident in Paris in the late 1940s. One of them, ‘I was a Rich Man’s Plaything’, part of the ‘Bunk’ series, was the first visual artwork to include the word ‘POP.’ Hamilton and Paolozzi became the forerunners to British Pop art and continued to flood the British art scene with Pop collage examining the irony in the all-American lifestyle. 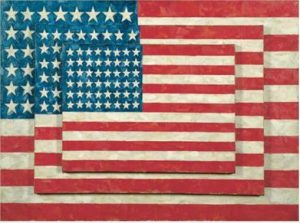 American Pop Art progressed differently from its British counterpart. While British Pop Art borrowed from American popular culture, looking at it with a sense romance, sentimentality, and irony, American Pop Art was bombarded every day with the diversity of mass-produced imagery. Flooded by advertisement, American Pop Artists produced work that was generally more bold and aggressive. Instead of the collages of Hamilton and Paolozzi, American artists used the zeitgeist of American post-war consumerism as a vehicle to interrogate beloved images of American culture. Widely interpreted as a reaction to the then-dominant ideas of Abstract Expressionism with pioneers such as Jackson Pollack, whose move away from traditional easel painting and conventionality paved the way for American Pop Art,  Pop Artists aimed to blur the boundaries between “high” and “low” culture, democratizing artistic subject into an even playing field for contemporary artists. 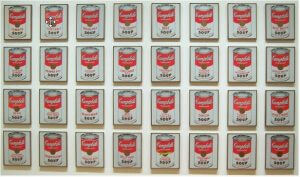 Made popular by Pop masters like Jasper Johns, Roy Lichtenstein, Andy Warhol, and Robert Rauschenberg, Pop Art exploded in the 1960s. Taking a page from the Dadaists of Britain, Warhol and Johns introduced ‘found objects’ into their paintings, using mundane images of soup cans and the American flags as Fine Art. It was the iconography of familiar images that appealed to Pop Artists.

Warhol is quoted saying, “I think every painting should be the same size and the same color so they’re all interchangeable and nobody thinks they have a better or worse painting.” In reaction to the elitism of Abstract Expressionism, Warhol, Johns, and their contemporaries encouraged Fine Art’s move to mass production, both in representation of object and in actual production of their artworks. reflecting the consumer identity of the American culture at the time, where both the wealthiest and poorest of citizens were drinking the same bottle of Coca Cola. 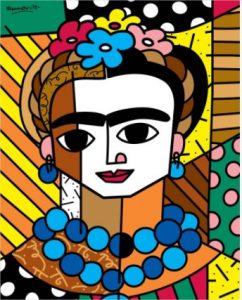 Pop Art continues into the twenty-first century. Reacting to similar but more contemporary zeitgeists of consumerism, globalization, technology, and fame, Neo-Pop Art is a movement reacting to the Pop Art movement, often repeating the motifs and images of famous Pop Artists like Johns, Lichtenstein, and Warhol with a deep respect, but also sense of humor and sarcasm. Characterized by bright colors, cartoon images, and, of course, images of popular culture, the Neo-Pop Art movement is just as popular and relevant now as its counterpart half a century ago. As artists continue to push boundaries further into artistic expression, Neo-Pop includes Alec Monopoly’s controversial Graffiti and Street Art, which interrogates the gap between wealthy and middle-class Americans using his signature image of the Monopoly Man, and expands into artists like Tommy, who uses recycled materials to undermine the one-time-use consumerism of the American culture, Jonas Leriche, whose photography pushes the boundaries of nature, infiltrating the human psyche with grotesque and cinematic portraits, and Gavin Rain, who combines the legacy of late nineteenth century Pointillism with the pixels of modern computer technology, creating portraits that are impossible to understand up close, but reveal themselves as you step back. Be sure to check out Eden Fine Art Gallery for some of the most diverse Neo-Pop, Modern, and Contemporary works in the world.