With stories and messages to spread to the world, street artist Jisbar proves himself to be multifaceted, with many talents under his belt. He is known for his busy and colorful works of art, each canvas filled with endless cultural commentaries. He delivers this in a multilayered fashion, with several layers of graffiti-style writing, evocative slogans, scribbles, colorful illustrations, doodles, large cultural symbols, and, on top of all this, reinterpretation of famous works of art. This is how Jisbar makes his stylish commentary on history and society. His most significant inclusion of a major historical artwork so far has been that of the Mona Lisa.

Among his artworks, you can find a unique collection of paintings dedicated to the Mona Lisa, including “Mona Collage Green,” “Rockstar Super Mona," “Mona Garden Lounge,” “Mona Basquiat," and more. Jisbar has many interesting connections to the world-famous painting; not only does he display and comment on it in his paintings, but he even participated in a record-breaking feat: sending his painting to outer space. 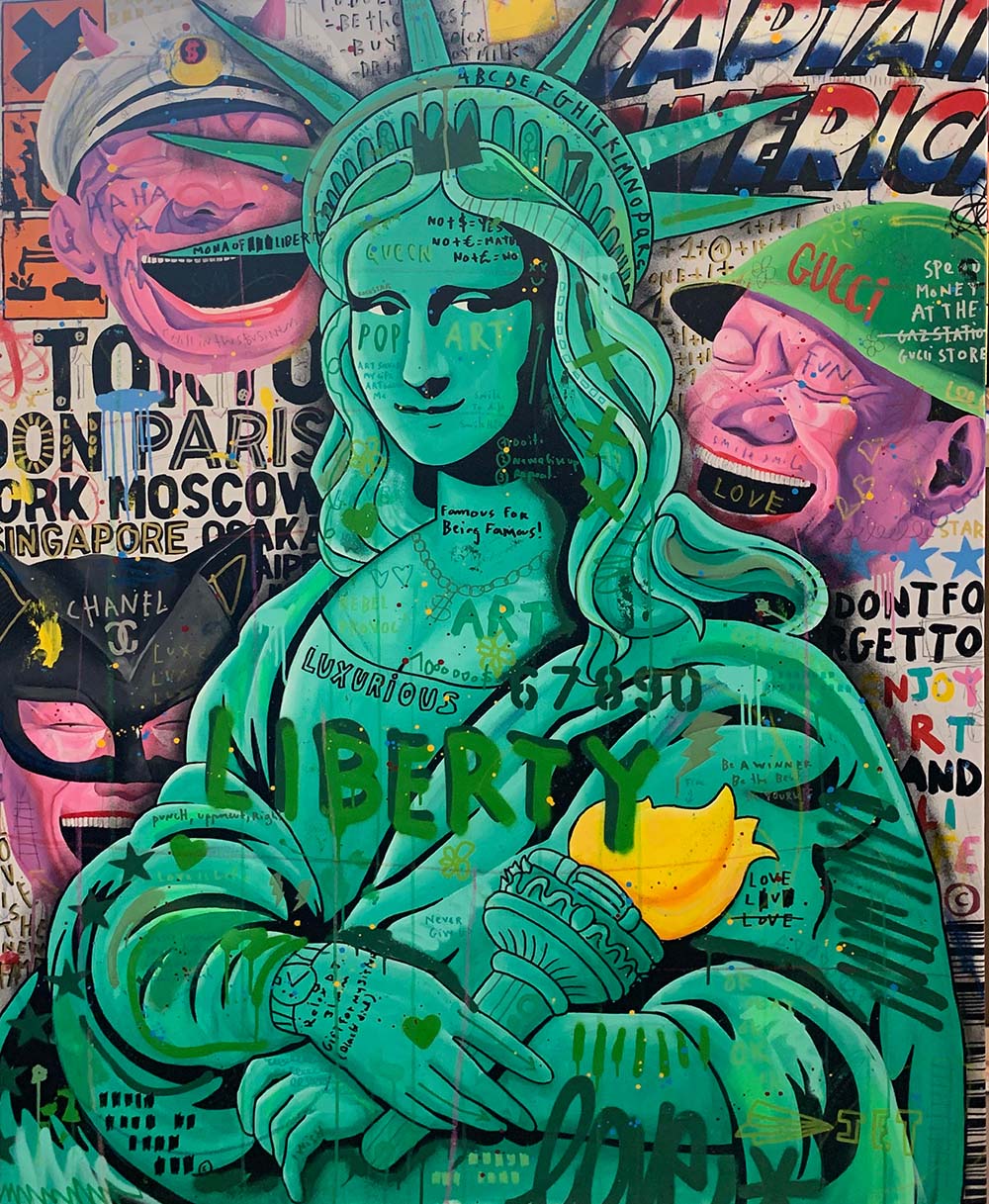 On the 500th anniversary of Leonardo Da Vinci's death, Jisbar became the first person to fly his own painting to outer space. His reimagined Mona Lisa, covered in powerful graffiti messages, floated 33.4 km above the earth for 1.5 hours.

Contemporary street artist Jean-Baptist Launay (AKA Jisbar) is the 21st century's premier visual storyteller. His abstract hot-takes on the pop-art movement and other artistic movements, as well as famous artists, are thought provoking for any viewer. Each viewer, depending on their background and unique story, will interpret his artworks entirely differently, especially because of the inclusion of cultural references that span decades and generations.

In an immensely exciting opportunity, Jisbar has been asked by the Louvre in Paris to participate for the next 10 years in their traveling exhibition “La Joconde." His dedication to challenging himself and his own creativity by reinterpreting the Mona Lisa led to a chance for Jisbar's Mona Lisa to return home. “Nothing could be more gratifying than having my own version of Mona Lisa at home, when I say home it's where it all begins, where I saw her for the first time,” said Jisbar, “…when they contacted me for the invitation, I didn't think twice: I immediately ‘wrapped’ my Mona because I knew it was time to let her travel again.” 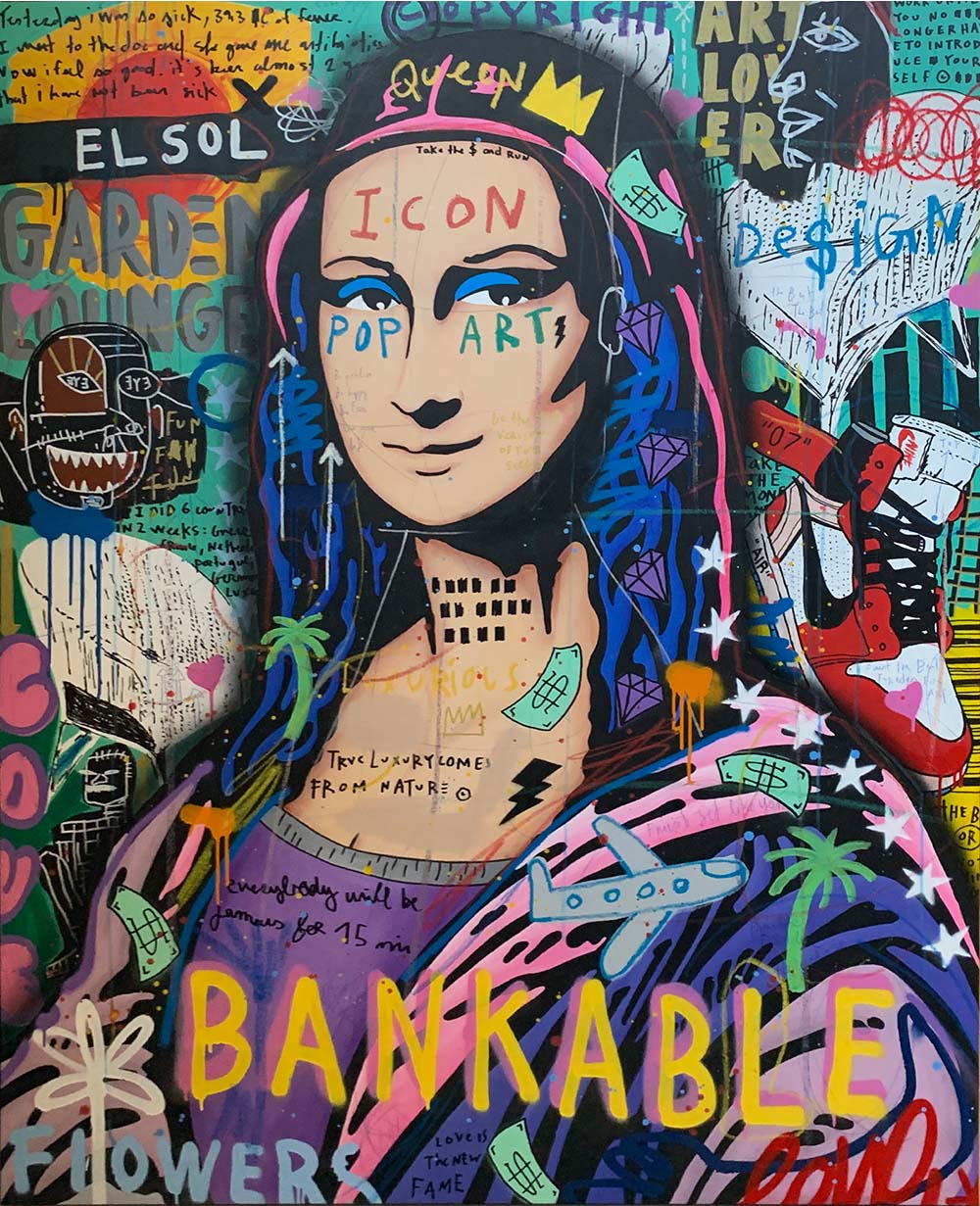 Rich in bright colors, his art always includes references to well-known historical art like the Mona Lisa, Piet Mondrian, Pablo Picasso, Gustav Klimt, Van Gogh, Frida Kahlo, Jean-Michel Basquiat, and Andy Warhol, among others. Some of his Mona Lisa-based artworks are also dedicated to an additional, second major artist, such as in the painting “Mona Basquiat,” which contains Basquiat-esque drawings on top of Mona's face. His works go deeper than just a few drawings on top of the originals. Jisbar fills the entire canvas with hundreds of colorful and relevant designs, slogans, bold statements, powerful messages, and symbols, all coming together to form a cohesive and mentally stimulating masterpiece, encouraging the viewer to derive their own meaning from the organized chaos in front of them.

To view artworks by Jisbar and other contemporary artists at Eden Gallery, visit your nearest gallery location or browse Eden's website.