Sequential graphic imagery used to tell a story is the oldest art form known to humankind. From pictures of the hunt etched into cave walls to modern-day graphics telling the exciting stories of superheroes or a lovable mouse, American Comic Art developed into one of the most recognizable genres of art to come out of the new world. In the ‘60s, America was undergoing a cultural and artistic revolution, but it didn’t end there. Still today, the same characters and stories grace the pages graphic novels, TV screens, clothing, and even fine art. Offering appealing visual imagery and insight into our very own childhoods, comics live on in fine art as seen in Eden Gallery’s Comic Collection, check out the collection here.

The global sensation Alec Monopoly entertains his audience with his brightly colored embodiments of the wealthy one percent in his graffiti-styled art. Represented by the ‘Monopoly Gang,’ embodying the wealthy elite, epitomize the lifestyle of the rich and famous. As detached from our own world as they may be, these characters still remain relatable as they are the ones that we grew up watching on television and read about in our comic strips. Richie Rich, the world’s richest kid, Scrooge McDuck, a duck that enjoys swimming in his fortune, and everyone’s favorite family, The Simpsons, are some of Monopoly’s favorite characters to illustrate the story of luxury living.

Richie Rich, the poor little rich boy, is so rich that his middle name is a dollar sign! The perfect addition to the Monopoly Gang! Sometimes painted to match his Harvy Comics Covers, sometimes depicted counting money or lugging around his ‘money bags,’ yes that is multiple, this 7-10-year-old boy certainly knows how to spend money.

First introduced in 1947 Scrooge McDuck is a classic character from the American comic scene. His story even touches on American history with accounting his riches to the Klondike Gold Rush. This duck is prototypical to many of the animated characters that followed soon after. A duck that swims in a vat of gold coins is perfectly fitting to the Monopoly Gang.

The Simpsons, a sitcom and comic book series with countless spin-offs, created some of the most recognizable characters in history. The yellow cartoon family represents a fictional family from ‘Middle America.’ Despite filling the gaps of many American stereotypes, Monopoly’s spin on the famed family is one that makes the viewer imagine how the Simpson family would behave had they been in the wealthy 1%. A world where instead of writing on chalkboards, Bart Simpson would be tagging Rolls Royces and Marge Simpson does up her big blue hair with extra bills of an unknown currency. This seemingly fictional life is one that many do enjoy, Monopoly takes the Simpson family out of Springfield and places them into this wealthy class, creating a commentary through his playful depictions on American values. 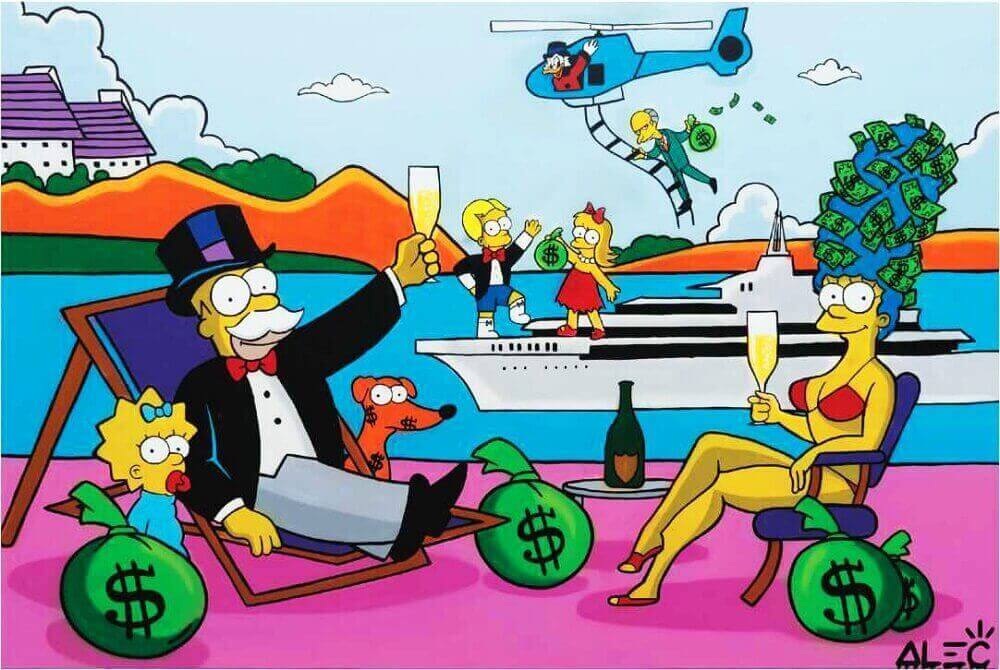 Alec Monopoly’s works demand to be at the forefront of the contemporary world of art. Using characters from American comic art that we have bonded with so well he creates a story that is bizarre and unattainable, and yet completely identifiable. Explore Monopoly’s lighthearted and colorful artworks here. 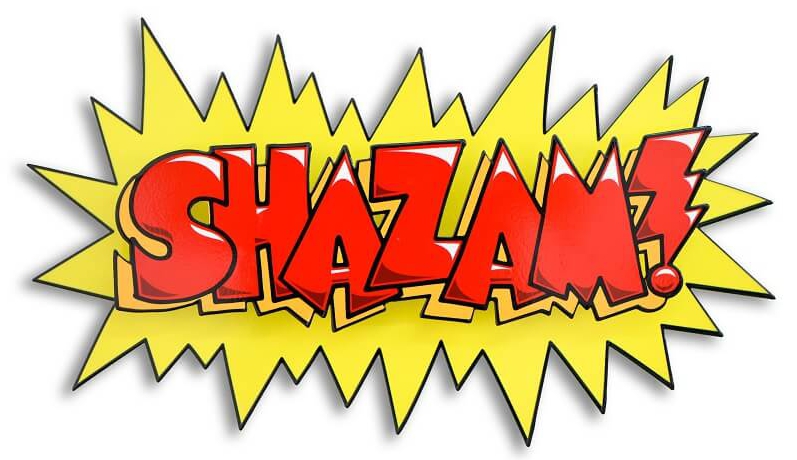 “One of my favorite quotes is, “Comic books are the gateway to literacy.” I have been reading and have been inspired by comic books and graphic novels for over four decades. Comics are invitations into the full experience of the writer and the artist’s mind. To be able to not only read what the writer creates but at the same time to be able to see how they envision their characters to look, is magical.” – David Kracov

David Kracov’s latest collection literally goes ‘BOOM.’ Using onomatopoeia, words that phonetically imitate or suggest the sound that it describes, Kracov created a collection that speaks to the modern viewer. The artist uses naturally suggestive words combined with bright colors so that the words are jumping out if the wall, not unlike how they would jump out of the pages of a comic strip. 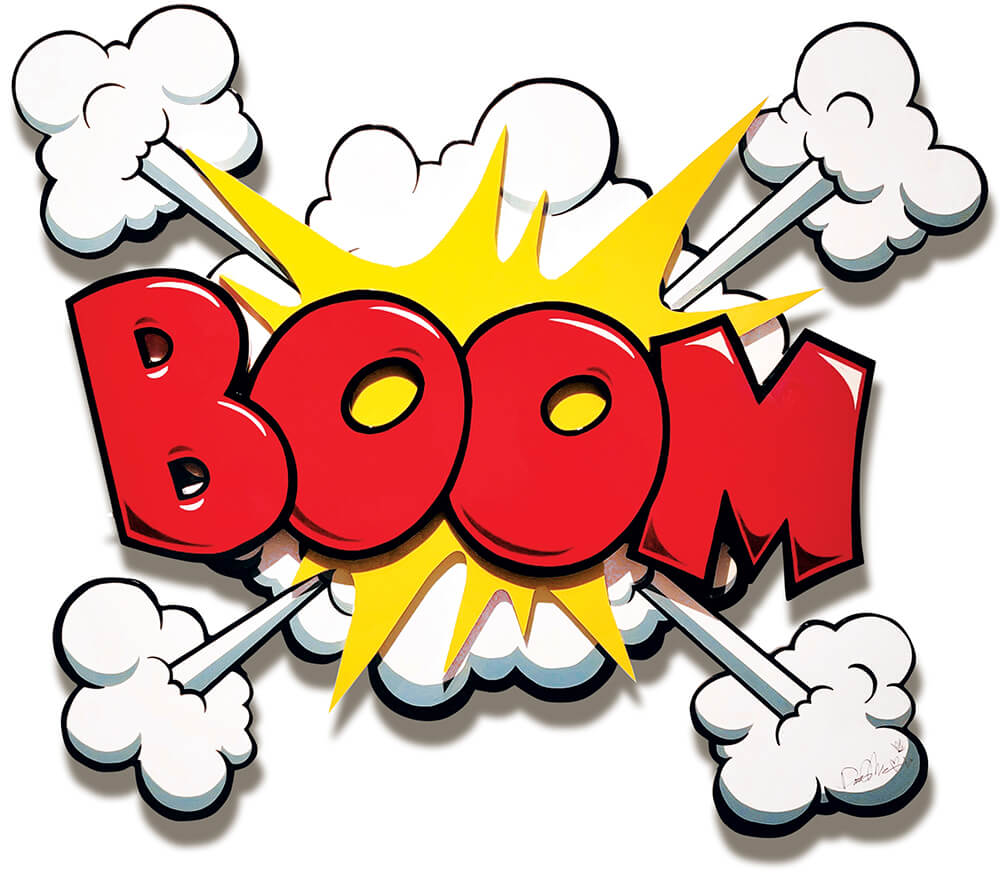 Comic books are a narrative represented through visual forms and often use onomatopoeia to express a sound that one would typically hear. In a printed medium vivid contrasting colors along with a bubble or explosion around the word help the viewer to hear the sound through the visuals. David Kracov takes this concept one step further by removing the context around the word and applying the word as is he layers the letters overtop of a decorative backdrop allowing the 3D format to pop even more. Deeply rooted in our childhood memories, this collection is profoundly nostalgic and contemporary at the same time.

Bright colors and bold euphemisms, this collection speaks your mind. View it here. 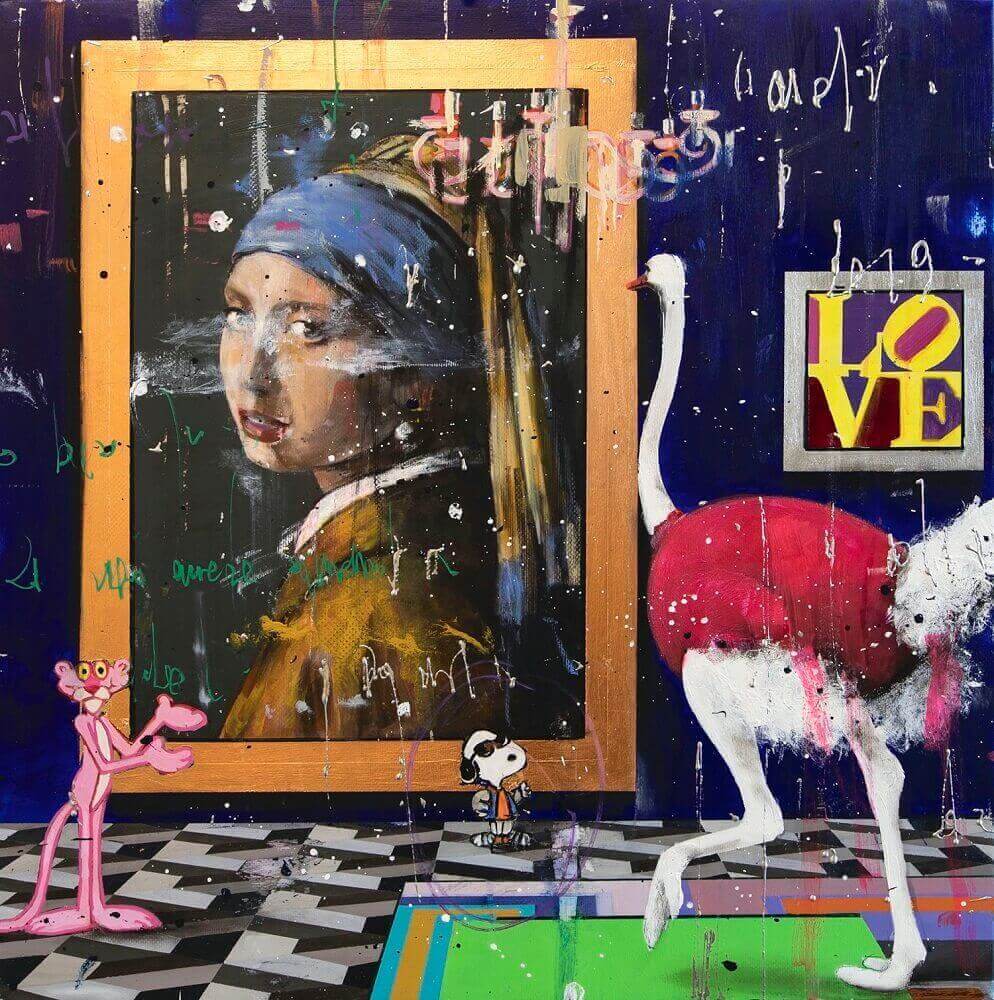 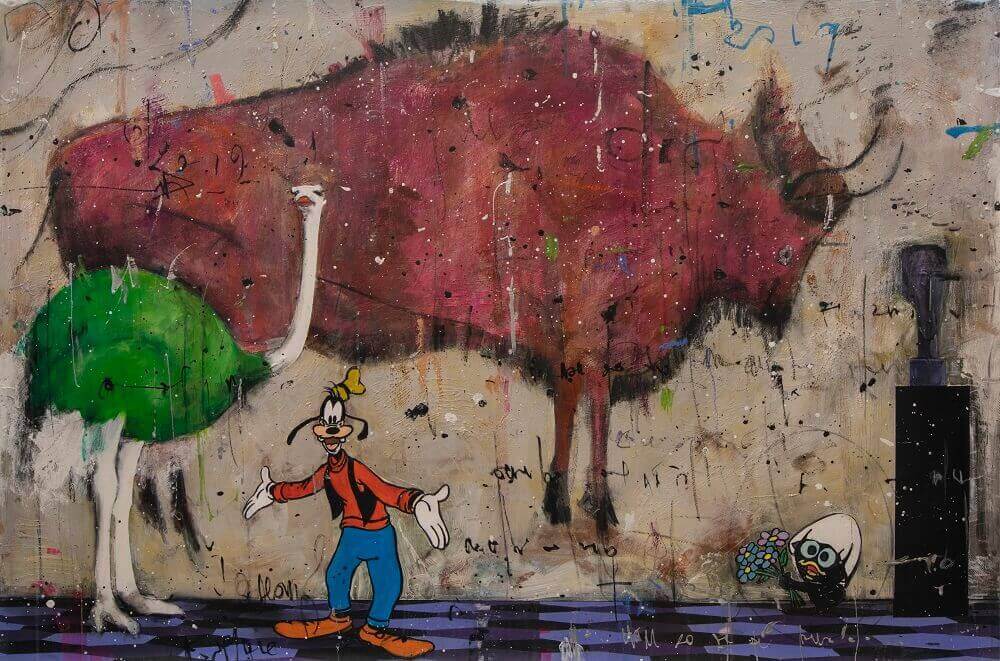 Named initially Dippy Dawg in his first comic strips, Goofy went on to become a beloved addition to the Mickey Mouse Gang. Often seen as Mickey Mouse’s sidekick, this funny and beloved character is used most often for comic relief. A comedic artist himself, Accardi uses humor throughout many of his works, allowing the audience insight into his vision and bringing joy to the spaces his art hangs.

One of the most iconic American comic ‘Peanuts’ ran from 1950 until 2000. Many generations have sweet memories of the loveable Charlie Brown and Snoopy the dog, playing the piano or in the case of Angelo Accardi’s paintings wandering through an art gallery. In ‘My New Work,’ Snoopy stands alone in a surly position with his sunglasses on looking as if he is a harsh art critic. Even though he is a dog, in the comics, his thought process is very human in nature. Without the thought bubble following him about, the audience still knows the character so well, his complex mix of innocence and egotism, that we truly believe him to be specialized enough to analyze and evaluate the art at hand. 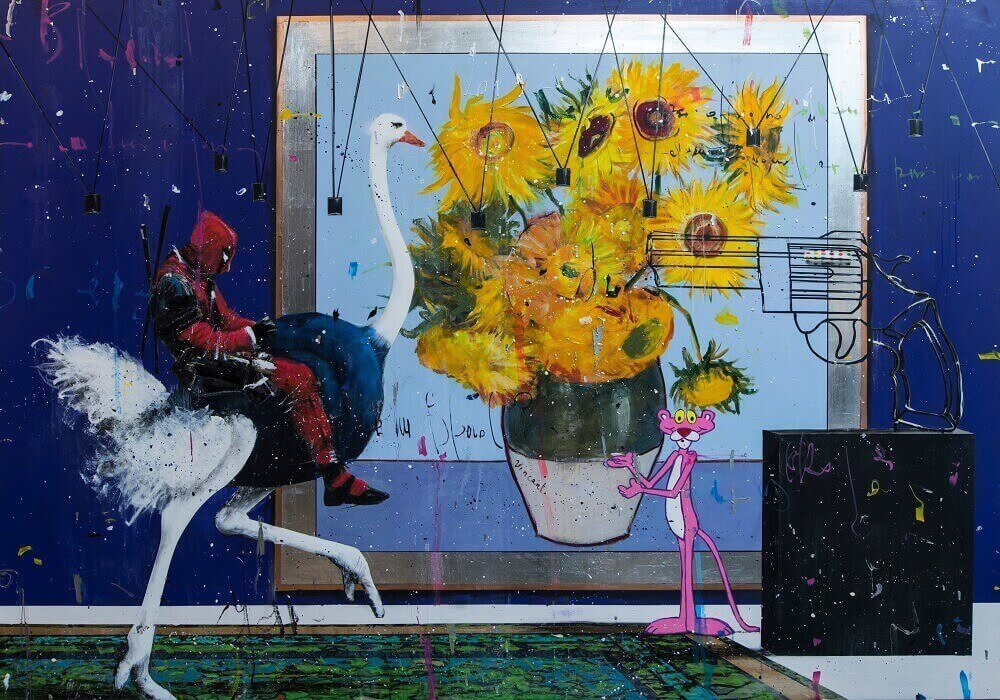 Originally from Italy, Accardi draws on inspiration from around the globe sharing in these cross-cultural references to bring the audience closer to his work. Enjoy the paintings and sculptures of Angelo Accardi here.

First introduced to the public in 1930, the iconic Mickey Mouse has had a career spanning over almost 100 years! Inspiring comics, cartoons, and Disney theme parks, it is no wonder his face graces the walls of art galleries as well. The artistic duo F&G use the mouse as a critical element in many of their works. Mickey Mouse plays perfectly into their shared fascination with cartoons and neons. For over 25 years, F&G have been creating symbolic art, capturing the essence of contemporary society. 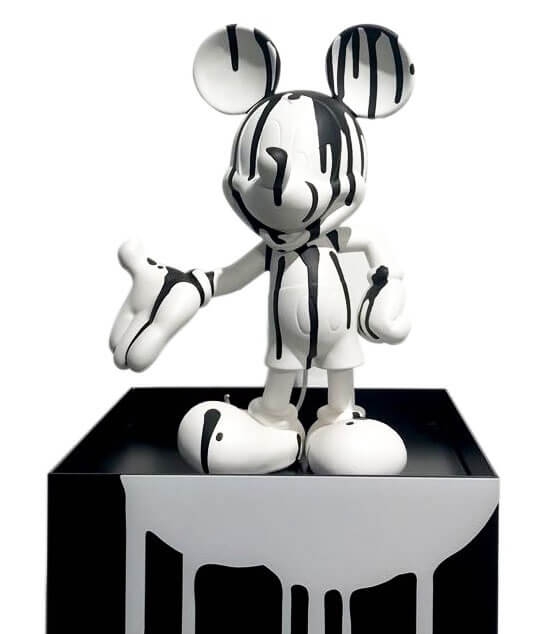 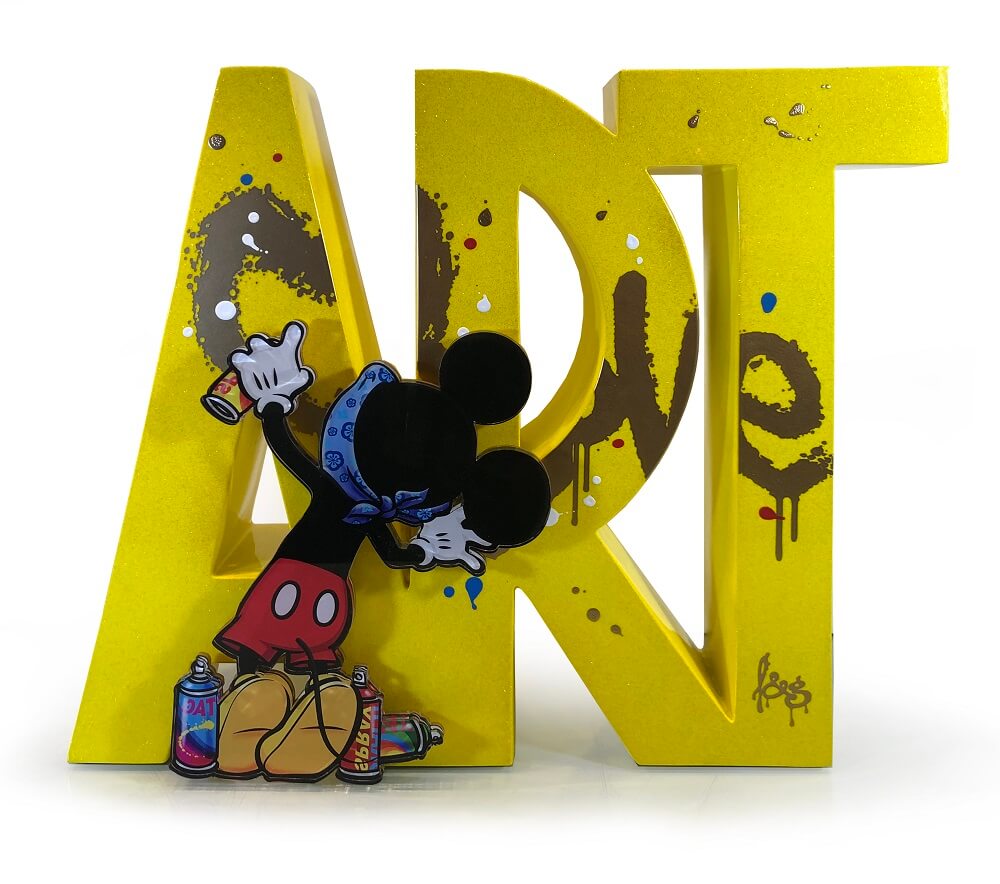 Often caught in the act of spraypainting ‘ART’ Mickey Mouse plays the part of a contemporary street artist in F&G’s depictions. For centuries graffiti has been an instrument of expression, but only in recent decades has it gained popularity as an acceptable art form. Yet, it is still considered by many to be a lower level of artistic expression paralleling to a similar viewpoint that many had of comic art. F&G directly compares the two by creating a scene of Mickey Mouse with a bottle of spray paint while he is his literally painting ART itself. F&G desire to reinvent artistic codes through their audacity and attitude towards pushing boundaries within the modern art scene. Check out F&G’s full collection here.

With an iconic and diverse history, American comic art has reached almost every aspect of consumer culture. From Mickey Mouse to The Simpsons, one hundred years of beloved characters have entered our hearts and our arts. Despite many of these comics having been discontinued by this time, they are still highly recognizable and relatable to people of all ages. Eden Gallery’s artists pay homage to these loveable personalities, painting them and sculpting them so we can enjoy them in the form of fine art. Explore Eden Gallery’s Comics Collection here.