Music has existed on this earth since the moment humankind found their voice. Music is so important that every culture in the world has its own form of music that is unique to their cultures core values.

The role that music plays in human life is priceless, therefore on June 21st, the world celebrates World Music Day. This day praises music in all its forms and acknowledges the incredible impact it's had on the world and the human spirit. Whether people choose to listen to music for a sense of enjoyment or the emotional response, music holds an immense amount of importance.

World Music Day is celebrated across the world. More than 120 countries recognize the value of this day and choose to participate in the celebrations. Free concerts are held across the world in order to make music accessible to all. World Music Day is also the perfect opportunity to try listening to a new type of music you wouldn't normally listen to, or even play a brand-new instrument you have never touched before.

This day invokes a reminder that anybody can make music. To fully embrace this annual holiday, everyone should take this day to sing their hearts out and celebrate the beauty of music. 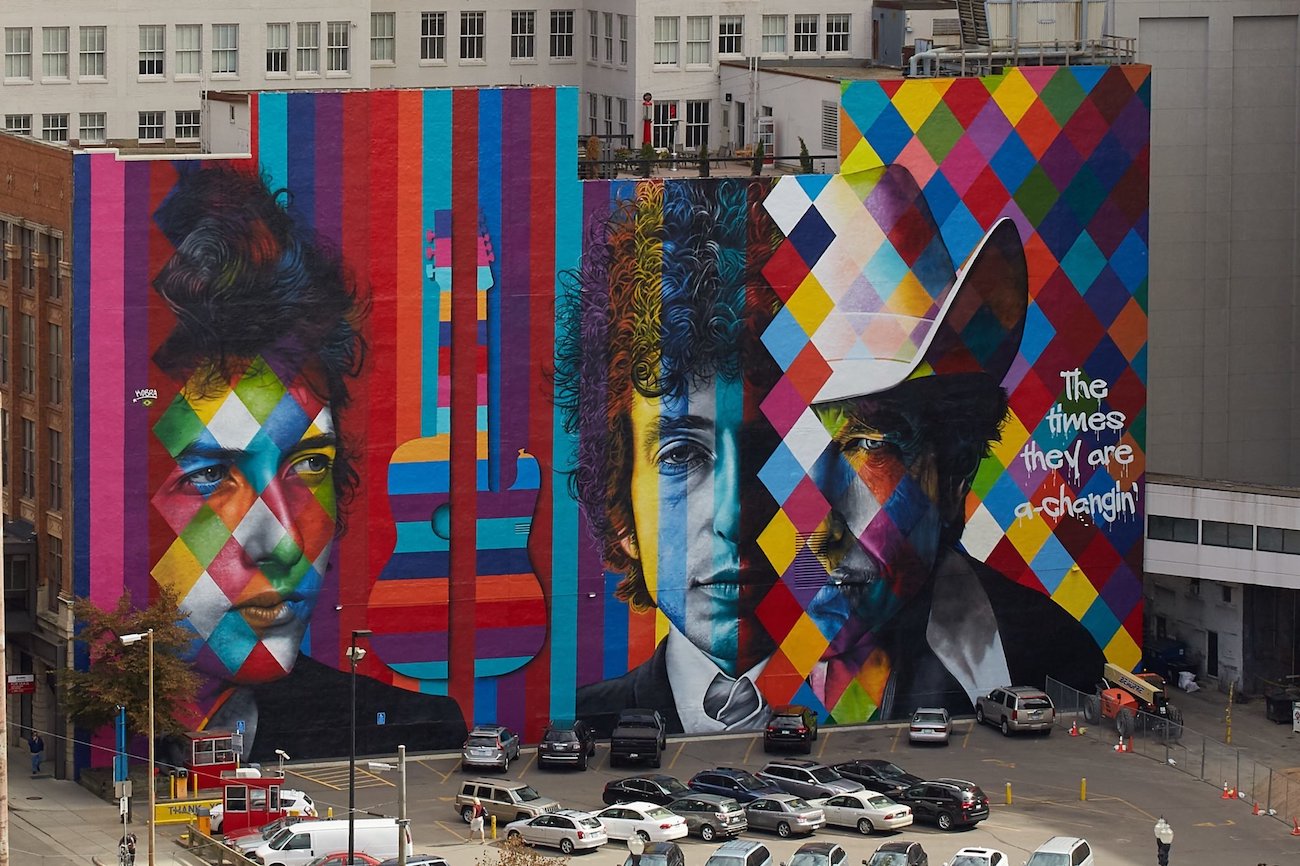 Music evokes emotions through the use of instruments, sounds, lyrics and more. Art uses colors, shapes, light, and darkness to induce similar emotions. Both music and art have the ability to evoke powerful emotional responses through exploiting and explaining our feelings. Due to the similarities between music and art, many famous musicians have made music through being inspired by visual works of art, while artists have credited musicians as a muse for their art work.

American Pop Artist, Keith Haring, always had a ‘boombox’ in his studio that played rap music while he was creating his artwork. He was most inspired by the band Run D.M.C and designed a sneaker style for the group.

Wassily Kandinsky, a Russian painter and art theorist who is credited with being one of the pioneers of abstraction in western art, was a huge supporter of incorporating music into his artwork. The painter gave his artwork musical titles such as 'Improvisations', Compositions’, and 'Fugue.'  In Kandinsky’s autobiography, Reminiscences, the painter touches upon the significant effect music had on him in relation to his artwork. He quotes “I saw all my colors in my mind, they stood before my eyes. Wild, almost crazy lines were sketched in front of me... It became quite clear to me that art in general was far more powerful than I had thought, and that painting could develop just such powers as music possesses.”

Accepting the similarities and differences across art forms is a beautiful learning process. There is so much to gain when different art forms mend into each others processes. 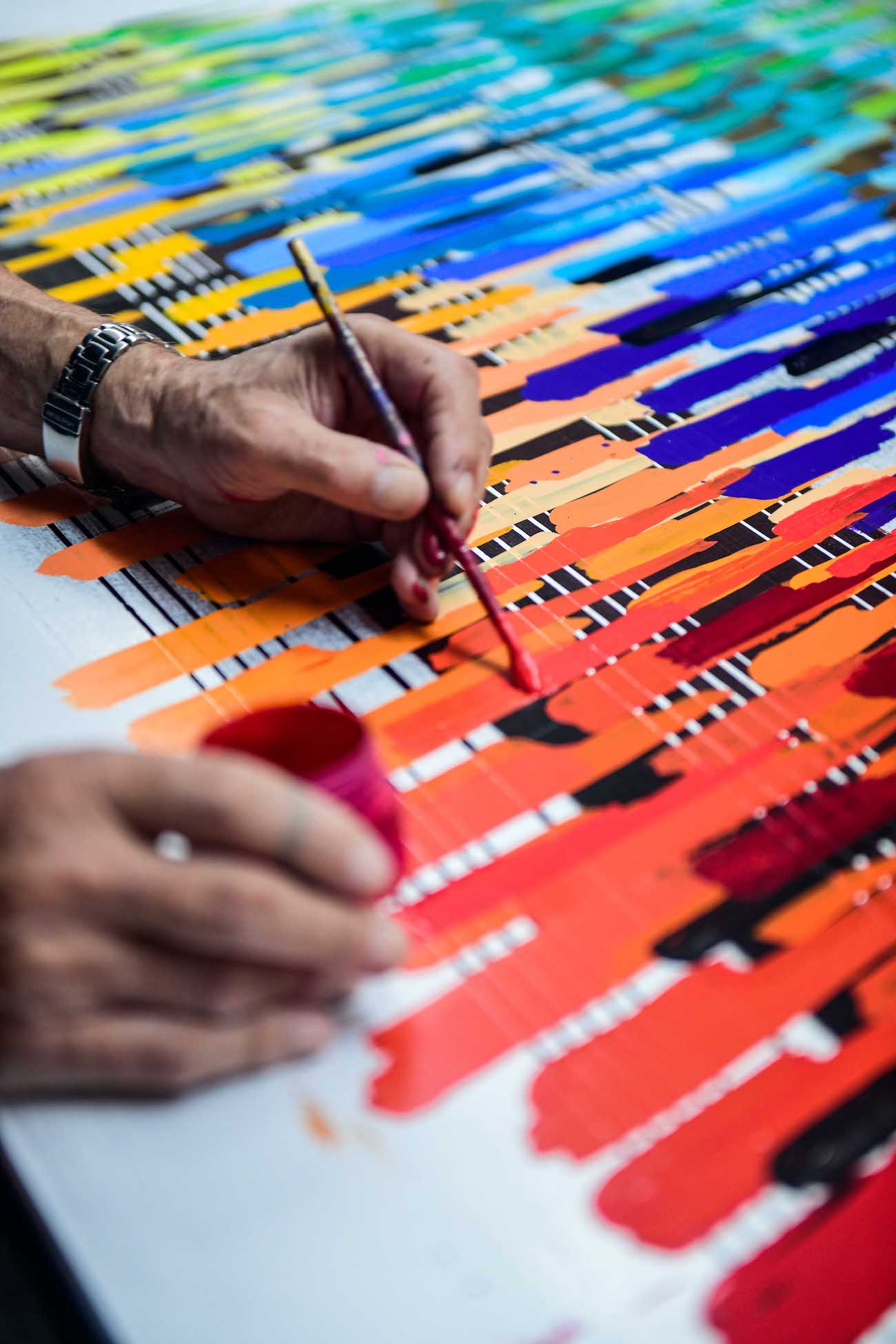 Music and Art at Eden Gallery

Calman Shemi fell in love with Jazz music at the age of 16 and ever since then, he fills his studio with soul music. Similar to a jazz composer, Shemi’s inspiration for his art work comes from the world around him. The intensified feelings he gets through rhythms and blues is what he incorporates into his paintings. Shemi’s collection ‘Notes’ includes lively musical notes that dance across the canvas. The notes are created through a variety of beautiful colors that come together through an abundance of textures and shapes. Before creating his paintings, Shemi visualizes a blank canvas that is devoid of a song. The canvas is waiting for music to fulfill its destiny. Through the use of music and a paintbrush, Shemi is able to create an array of unique and exquisite paintings.

Angelo Accardi also plays a part in incorporating music into his art work. Within a beautiful mixed media painting called  ‘Freddie’s Concert in the Jungle’, Accardi paints the iconic musician, Freddy Mercury, playing piano in the middle of the jungle, surrounded by various animals and public figures.

Eduardo Kobra also features musicians within his paintings. Composers such as Jimi Hendrix, Jean-Michel Basquiat, Janis Joplin, Amy Winehouse and many more are painted in vibrant colors, representing the powerful effect music has on Kobra’s artwork.