A beloved figure in global street art, Eduardo Kobra is a talented muralist with some of the largest murals in over five continents. He began his career as a teenager who grew up in a small impoverished neighborhood in São Paulo, and since then, has become one of the most recognized street artists in the world.

Taking historical figures and celebrities as his subjects, Kobra produces large-scale artworks with an incredible level of compositional complexity. He incorporates intricate patterns and hundreds of repeating shapes that leave no room for negative space or unadorned passages. The celebrated artist utilizes bright colors and bold lines while staying true to a kaleidoscope theme throughout his art.

Kobra learned and developed his art through observing the work of artists he admires such as Eric Grohe, Keith Haring, Diego Rivera, and Banksy. Through the work of these extraordinary artists, Kobra discovered his passion for street art. His cunning use of brushes, airbrushes, and spray cans is remarkable and his larger-than-life murals are a sight for everyone to marvel at.

This year, Eden Gallery is celebrating Kobra’s 30th year of creating art. The Brazilian muralist has always pushed himself to explore new creative fields, and his unmissable work throughout his artistic journey must be recognized and glorified.

In celebration of Kobra’s 30th year of creating beautiful art, the artist will be honorably attending an exhibition at the United Nations in New York. At the event, Kobra will be painting a large mural on the UN building itself which will be on display for the public to see for approximately three months.

Kobra will be arriving in New York on August 20th to attend an opening ceremony at the UN building. On August 22nd, Kobra will begin to paint the mural while his past works are on display for the public to see.

Finally, by the beginning of September, the completed mural will be revealed, allowing the public to see Kobra’s exquisite work.

Life as a Muralist

Kobra’s work navigates the universe of street art. The streets represent his atelier, his studio, and the possibility of bringing art to countless people. The muralist uses his work to raise awareness of many issues, such as animal protection, indigenous lives, environmental protection, history, remembrance, violence, racism, peace, and coexistence between peoples and religions. Kobra strongly believes that his art is an extension of who he is and the values he represents.

“The Kiss” is one of Kobra’s most famous murals that was created in 2012 on the High Line in New York, which was displayed for four years. The mural was a full-color reinterpretation of the image taken by American photojournalist Alfred Eisenstaedt on August 13, 1945. The image portrays the moment in history when people took to the streets to commemorate the end of World War II. 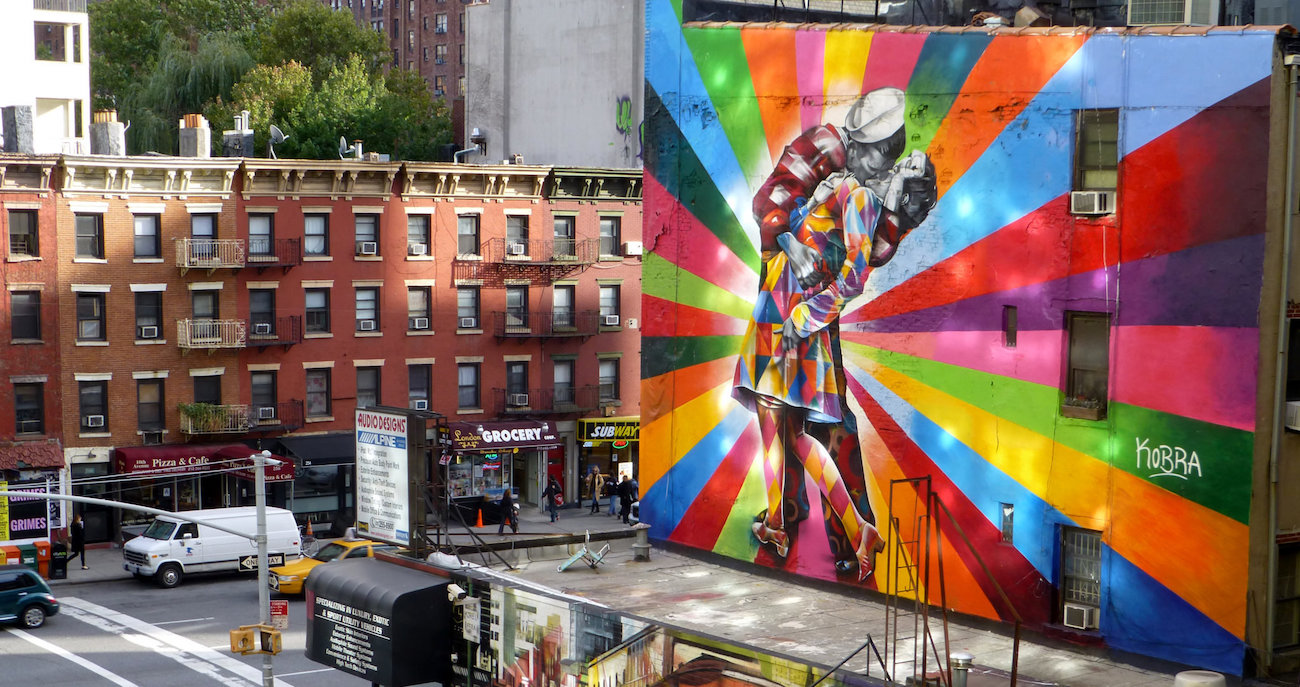 In September 2018, Kobra presented his tribute to the firefighters of New York on the 17th anniversary of the September 11th attacks. The piece is part of a project that included 28 other murals that are spread throughout the city. The complex project took 3 years to complete and demonstrated his worldview on issues and the history of the city.

Kobra’s most famous piece to date is Etnias, a massive mural filled with vibrant colors, painted to commemorate the 2016 Olympic Games in Rio de Janeiro. The mural is fifty-one feet tall and 560 feet long and has set the Guinness World Record for the largest spray paint mural ever created.

In 2017, Kobra beat his record by creating a mural on an area of almost 6,000 square meters, on several facades of a chocolate factory in Sao Paulo. The graffiti illustrates a young Amazon native rowing a cocoa-laden canoe, in the middle of a river of chocolate.